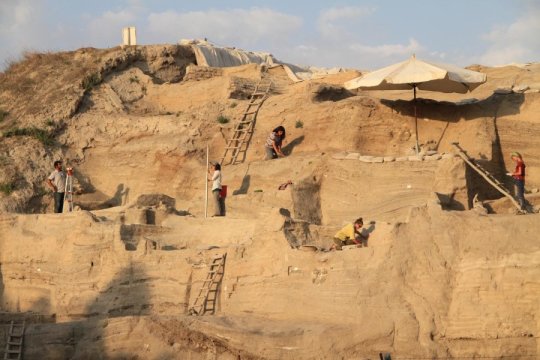 The transition from hunting and gathering to farming and herding is considered a crucial turning point in the history of humanity. Scholars think the intensive food production that came along with the Neolithic Revolution, starting around 10,000 B.C., allowed cities to grow, led to technological innovation and, eventually, enabled life as we know it today.

It has been difficult to work out the details of how and when this took place. But a new study published in Science Advances begins to resolve the scale and pace of change during the first phases of animal domestication at an ancient site in Turkey. To reconstruct this history, the authors turned to an unusual source: urine salts left behind by humans and animals.

Whereas dung is commonly used in all sorts of studies, “this is the first time, to our knowledge, that people have picked up on salts in archaeological materials, and used them in a way to look at the development of animal management,” says lead author Jordan Abell, a graduate student at Columbia’s Lamont-Doherty Earth Observatory.

The team used the urine salts to calculate the density of humans and animals at the site over time, estimating that around 10,000 years ago, the density of people and animals occupying the settlement jumped from near zero to approximately one person or animal for every 10 square meters. The results suggest that domestication may have been more rapid than previously expected. They also support the idea that the Neolithic Revolution didn’t have just one birthplace in the Fertile Crescent of the Mideast, but rather occurred across several locations simultaneously.

At the ancient settlement of Aşıklı Höyük in central Turkey, archaeological evidence suggests that humans began domesticating sheep and goats around 8450 BC. These practices evolved over the next 1,000 years, until the society became heavily dependent on the beasts for food and other materials.

As it happened, co-authors Susan Mentzer from the University of Tübingen and Jay Quade from the University of Arizona, where Abell worked on this project as an undergraduate, had previously documented some unusually high levels of salts around Aşıklı Höyük, and were perplexed by what they meant. Using this data and others, the new study supports the idea that the salts likely came from the urine of humans, sheep and goats. The study uses the abundance of the salts over time to track the growth of the community and its animals over a period of 1,000 years.

Working with Turkish archaeologists, including Istanbul University’s Mihriban Özbaşaran, who heads the Aşıklı Höyük dig, the team collected 113 samples from all across the site — from trash piles to bricks and hearths, and from different time periods — to look at patterns in the sodium, nitrate and chlorine salt levels.

They found that, overall, the urine salts at Aşıklı Höyük increased in abundance over time. The natural layers before the settlement was built contained very low levels of salts. The oldest layers with evidence of human habitation, spanning 10,400 to 10,000 years ago, saw slight increases but remained relatively low in the urine salts. Then the salts spike during a period from 10,000 to 9,700 years ago; the amount of salts in this layer is about 1,000 times higher than in the preceding ones, indicating a rapid increase in the number of occupants (both human and animal). After that, the concentrations decrease slightly.

Abell says these trends line up with previous hypotheses based on other evidence from the site — that the settlement transitioned first from mostly hunting sheep and goats to corralling just a few, then changed to larger-scale management, and then finally shifted to keeping animals in corrals on the periphery of the site as their numbers grew. And although the timing is close to what the study authors expected, the sharp change around 10,000 years ago “may be new evidence for a more rapid transition” toward domestication, says Abell.

Using the salt concentrations, the team estimated the number and density of people plus sheep and goats at Aşıklı Höyük, after accounting for other factors that might have influenced the salt levels. They calculated that around 10,000 years ago, the density of people and animals occupying the settlement jumped from near zero to approximately one person or animal for every 10 square meters. By comparison, modern-day semi-intensive feedlots have densities of about one sheep for every 5 square meters.

Although it is not currently possible to distinguish between human and livestock urine salts, the urine salt analysis method can still provide a helpful estimate of sheep and goat abundance. Over the 1,000 year period, the team calculated that an average of 1,790 people and animals lived and peed on the settlement every day. In each time period, the estimated inhabitants were much higher than the number of people that archaeologists think the settlement’s buildings would have housed. This indicates that the urine salt concentrations can indeed reflect the relative amounts of domesticated animals over time.

The researchers plan to further refine their methods and calculations in the future, and hope to find a way to differentiate between human and animal urine salts. They think the methodology could be applied in other arid areas, and could be especially helpful at sites where other physical evidence, such as bones, is lacking.

The study’s results also help shed light on the geographic spread of the Neolithic Revolution. It was once thought that farming and herding originated in the Fertile Crescent, which spans parts of modern-day Iraq, Syria, Lebanon, Israel, Egypt, Jordan and the Palestinian Territories, then spread outward from there. But mounting evidence, including today’s study, indicates that domestication and the transition to Neolithic lifestyles took place concurrently over a broad and diffuse swath of the region.

Anthropologist and co-author Mary Stiner from the University of Arizona said that the new method could help to clarify the larger picture of humanity’s relationship to animals during this transitional period. “We might find similar trends in other archaeological sites of the period in the Middle East,” she said, “but it is also possible that only a handful of long-lasting communities were forums for the evolving human-caprine relationships in any given region of the Middle East.”

Güneş Duru and Melis Uzdurum from Istanbul University were also authors on the paper.