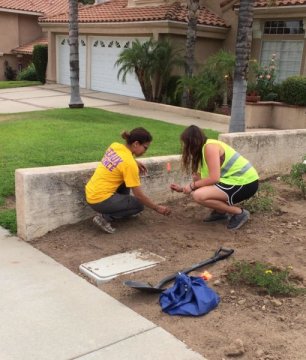 Using an array of coffee-can sized geophones deployed for about a month in backyards, golf courses and public parks, researchers collected enough data to allow them to map the depth and shape of the San Gabriel and San Bernardino sedimentary basins of Los Angeles, California.

Seismologists think these sedimentary basins may act a “waveguide” to focus and trap energy from an earthquake on the southern San Andreas Fault, so understanding their structure is important to help predict how well they might channel the energy from such an earthquake into downtown Los Angeles.

The research team, led by Patricia Persaud of Louisiana State University and Robert Clayton from the California Institute of Technology, was able to map the two basins in greater detail than previous studies, showing that the San Gabriel basin is deeper than the San Bernardino basin and that the San Bernardino basin has an irregular shape. Persaud and colleagues also uncovered signs of deep offsets in layers of the earth’s crust that could be related to two faults — the Red Hill and Raymond faults — that have been previously mapped in nearby areas at the surface.

“It is currently too early to say how our results will change how we might think of these basins’ ability to channel seismic energy,” Persaud said. “However, we are collecting more data in the area that will be used to further refine the basin structure.”

Geophones are instruments that convert the velocity of ground motion into voltage which can be used to determine the geometry of structures beneath the earth’s surface. Visualizing the details of sedimentary basin structure requires a large number of seismic stations that are closely spaced in order to capture important changes in structure laterally across the basin. Geophone arrays offer an inexpensive and feasible way to collect this data in a densely-populated urban area, compared to the complications and expense of deploying broadband seismometers, Persaud noted.

Each of the 202 nodes deployed in the study, in three lines spanning the northern basins, are about the size of a coffee can. “They weigh about six pounds and have a data logger, battery and recorder all in one container,” Persaud explained. “To place them in the ground we dig a small hole that will allow the nodes to be covered with about two inches of soil once they are firmly planted. Most Los Angeles area residents tell us to put them wherever we want, some even help us dig the holes; so we choose a site in their yards and in about five minutes we have the node in place and recording.”

In most cases, property owners were “extremely friendly and accommodating” during the current study, said Persaud. “What’s interesting is when we got a positive response it was almost immediate. Los Angeles residents are very much aware of the elevated seismic hazard in this region, and are often curious about our study and the nodes, and they want to find out more. Some offer to spread the word about our study through social media and encourage their friends and neighbors to participate as well.”

The nodes collected data continuously for 35 days. In this time, they detected ground motion from magnitude 6 and greater earthquakes that occurred thousands of kilometers away from Los Angeles. Seismic waveform data from these teleseismic earthquakes can be used with a method called the receiver function technique to map the thickness of the crust and shallow crustal structures below a seismic station. The receiver functions calculated from the nodal arrays are similar to those calculated from broadband data, the researchers concluded, but the nodal array offers a higher-resolution look at crustal structures such as the boundary between the earth’s crust and mantle and the interface between sediments and basement rock across the basins.

This summer, the research team is back in California placing nodes “along new lines that are intended to fill in any areas where there might be a change in basin shape,” said Persaud. “We have just deployed three new profiles and will then compile the results from all of our profiles to produce an updated structural model for the basins.”