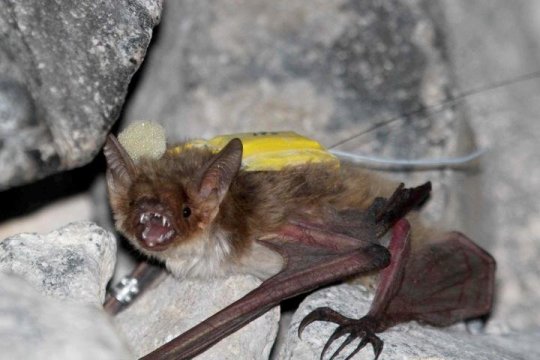 Humans aren’t the only species that have dinner parties. Scientists have observed many animals, including bats, eating in groups. However, little was known about whether bats actively help each other find food, a process known as social foraging.

With the help of novel miniature sensors, an international group of biologists that included University of Maryland Biology Professor Gerald Wilkinson found that bat species foraged socially if their food sources were in unpredictable locations, such as insect swarms or fish schools. In contrast, bats with food sources at fixed locations foraged on their own and did not communicate with one another while foraging or eating. The results of the study were published in the November 19, 2018 issue of the journal Current Biology.

“We were able to show that bats who can’t predict where their food will be are the ones that cooperate with each other to forage,” Wilkinson said. “And I don’t think they are unique — I think that if more studies are done, we will find that other bat species do similar things.”

The researchers selected five bat species from around the world for the study — two species with unpredictable food sources and three with predictable food sources. They fit each bat with a small, lightweight sensor that operated for up to three nights. Because the sensor only weighed approximately 4 grams, it did not hinder the bat’s movements. The sensor recorded GPS data to log each bat’s flight path and audio in ultrasonic frequencies to document bat calls. The researchers recaptured each bat to download the data. In all, the researchers tracked 94 bats in this study.

Edward Hurme, a UMD biological sciences graduate student in Wilkinson’s laboratory and a co-lead author of the paper, tracked one of the bat species — the Mexican fish-eating bat, which lives on a remote Mexican island.

“We took a fishing boat to an uninhabited island where these bats live and camped there for a month at a time,” Hurme said. “Field work can be challenging. One time, a hurricane came and all we could do was hide in the tent. Fortunately, we survived and so did our data.”

After collecting data on all five bat species, the researchers charted the bats’ flight paths and analyzed the audio recordings. They listened for the distinctive, species-specific calls the bats make during normal flight and when trying to capture prey. The research team used this information to map where and when the bats found and ate food and whether other bats were nearby.

The results showed that the three species of bats that eat predictable food sources, such as fruits, foraged on their own. When they found food, they also ate alone. This makes sense, according to Wilkinson, because they didn’t need any help finding food. In fact, having other bats around could create harmful competition for food.

In contrast, the two species of bats with unpredictable food sources often flew together with other members of their species. Moreover, when a tracked bat found prey, other individuals nearby also began to forage. The findings suggest that these bats forage cooperatively and socially within their own species.

The researchers also found that socially foraging bats may eavesdrop on one another by staying close enough to hear each other’s feeding calls.

The next step for this research is to investigate what strategies bats use in social foraging. In particular, Hurme hopes to discover whether these bats pay attention to the identity of their fellow foragers.

“We would like to know if socially foraging bats will follow any member of their own species or if they prefer specific individuals who are the most successful at finding food,” Hurme said. “There is some evidence that bats can recognize each other by voice, so we are working on ways to identify individuals by their calls.”

This work was supported by the European Research Council (ERC) (Award No. ERC-2015-StG — 679186_GPS-Bat), the Office of Naval Research (Award No. N62909-16-1-2133), Consejo Nacional de Ciencia y Tecnología (National Council of Science and Technology) (Award No. 237774), the National Geographic Society (Award No. 9705-15), The Explorers Club Exploration Fund — Mamont Scholars Program, the Animal Behavior Society, the Tower Foundation (Award No. 034-1500-0508), the German Research Foundation (Award No. GO2091/2-1) and the Minerva Foundation. The content of this article does not necessarily reflect the views of these organizations.