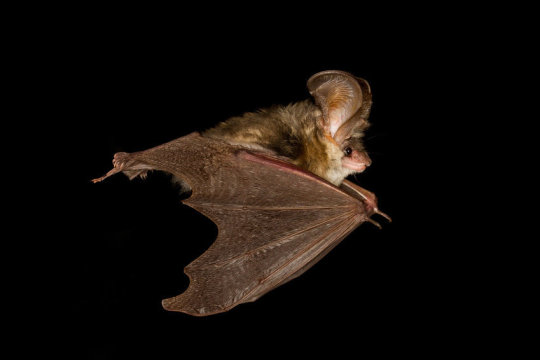 For the first time, researchers have succeeded in directly measuring the aerodynamics of flying animals as they manoeuvre in the air. Previously, the upstroke of the wings was considered relatively insignificant compared to the powerful downstroke but, in a new study, biologists at Lund University in Sweden have observed that it is on the upstroke of the wings that bats often turn.

“Until now, we have not known very much about what animals actually do when they fly, since we have focused on steady flight. Steady flight is in fact not very common for animals flying out in the wild. We have now conducted direct aerodynamic measurements on bats and we can see how flexible they are. They turn in several different ways depending on where they are in the wing-beat,” explains Per Henningsson, a biologist at Lund University.

“It is really fascinating to see how complex and elegant the pattern of movement is, and how the bats choose the best solution just as they decide to start a manoeuvre,” he continues.

For the bats, flight technique with fast manoeuvres at high speed is important to successfully capture insects in flight, as well as to avoid collision with various obstacles such as trees and buildings.

The results could be significant in the development of the next generation of drones.

“One of the main challenges for the industry is about control and stability and enabling drones to avoid obstacles easily. In that context, our results are very relevant,” says Per Henningsson, who does not exclude the possibility of future drones being equipped with flapping wings.

The study was conducted on two long-eared bats that were trained to fly in a wind tunnel. As prey, the researchers used mealworms attached to a device that could be moved laterally. By moving the device to the right or to the left, the researchers made the bats turn to follow the direction of the prey. The researchers visualised the air flow and filmed the animals with high-speed cameras. This allowed them to link the aerodynamics to the movements.

The researchers behind the study are biologists from Lund University and the University of Southern Denmark.