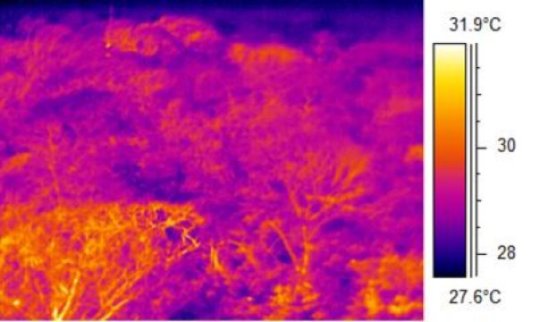 The vaulted canopies that tower above Earth’s rich tropical forests could be especially vulnerable to climate change-related temperature increases, according to a new report from Florida State University researchers.

In a study published in the journal Ecosphere, scientists found temperatures in the forest canopies of Panama’s Barro Colorado Island exceeded maximum air temperatures by as much as 7 degrees Celsius. Their results suggest that as air temperatures continue to climb, canopy temperatures could increase at a 40 percent higher rate — a shift of potentially major consequence for tropical forest health.

“Tropical forests are among the most productive places on Earth — they account for about 30 percent of terrestrial productivity,” said study author Stephanie Pau, an assistant professor in the Department of Geography. “These forests are vulnerable to climate change and climbing temperatures.”

Tropical species like those in the canopies of Barro Colorado Island evolved to survive within a narrow range of equatorial temperatures, and are therefore hypothesized by scientists to be especially sensitive to minute temperature change.

“We wanted to determine the consequences of rising canopy temperatures for the ecological functioning of these forests,” Pau said. “We show that as temperatures warm, there might be a reduction in productivity.”

Using a refined thermal imaging system, Pau and her team captured detailed snapshots of the canopies’ thermal profile every five minutes for several months. This continuous, precise monitoring showed that temperatures were highly variable — within half a degree of the mean temperature less than 20 percent of the time — indicating significant and potentially disruptive fluctuations.

This classified breakdown of forest surfaces revealed a dynamic variation in temperature change. Overall temperature increase, accompanied by this pronounced variability, suggests that some canopy-dwelling species may be at particular risk.

“There are so many different organisms that use and partition the canopies in different ways,” Pau said. “For example, ant species in tropical forests are extremely sensitive to bark temperatures. The diversity of canopy dwelling species will be affected by canopy temperatures — and it’s not just how hot it will get, but it’s also the temperature variability within a canopy.”

Rising air temperatures are routinely cited by scientists and lay people alike as a sobering effect of our rapidly changing climate, but Pau’s research demonstrates that these straightforward measurements may not tell the whole story. If the atmosphere continues to warm, she and her team discovered, canopy temperatures will warm at a rate of 1.4 degrees Celsius for every 1-degree increase in air temperature.

For plant and animal species perfectly suited for survival within a narrow and stable range of temperatures, this kind of dramatic increase could cause considerable harm.

“When people talk about climate change, we usually hear about air temperatures, but we should keep in mind that tropical forest canopies are even more vulnerable than air temperatures might indicate,” Pau said.

Materials provided by Florida State University. Note: Content may be edited for style and length.