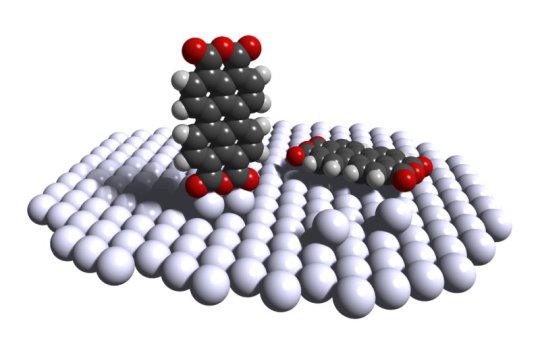 For quite a while now, researchers have been able to produce structures from single atoms. One of the first examples was presented by D. M. Eigler and E. K. Schweizer in 1990 in Nature: a tiny IBM logo formed from just a few xenon atoms was produced with a scanning probe microscope. But even today, almost 30 years later, we are still a long way from fabricating nanostructures directly from complex molecules. Although molecules are much bigger than atoms, they are much more difficult to control. “With atoms, the orientation is not important. But molecules have a specific shape. For example, the orientation in which they adhere to a surface or to the tip of the microscope is important,” says Prof. Stefan Tautz, institute head at Forschungszentrum Jülich.

In the peer-reviewed journal Nature, the group headed by Dr. Ruslan Temirov at Tautz’s institute now present a new breakthrough experiment in which they successfully oriented a platelet-shaped PTCDA molecule, which is structurally related to graphene, as desired. To do so, the researchers used the tip of a scanning probe microscope to attach two silver atoms to the edges of the molecule, which they then lifted up until it stood upright on the tiny “silver platform.”

“Until now, it was assumed that the molecule would revert back to its favoured position and lie flat on the surface. But that is not the case. The molecule is surprisingly stable in the upright orientation. Even when we push it with the tip of the microscope, it does not fall over; it simply swings back up again. We can only speculate as to the reason for this,” says Dr. Taner Esat, first author of the study.

The work is an important step in the development of new production techniques with single molecules. Over the course of history, humans have learnt how to control the world on ever-smaller scales. The ultimate goal is to be able to fabricate arbitrary molecular architectures. This would involve assembling nanostructures directly from single molecules, a bit like Lego. The application potential would be unlimited. Nanoelectronics, in particular, would profit from the completely new possibilities of realizing basic functionalities, such as logic, memory, sensor, and amplifier circuits.

“In the macroscopic world, production processes are very sophisticated. On a smaller level, we’re not yet quite as advanced. Nature is way ahead of us there,” explains Stefan Tautz. In living cells, molecules form up following the self-assembly mechanism, according to their molecular properties. Researchers at Jülich’s Peter Grünberg Institute (PGI-3) are aiming to go beyond this natural paradigm. With their research, they are hoping to pioneer a fabrication technology that is not limited to a few predetermined structures, but will enable the essentially free creation of structures on the nanoscale.

“Take cars, computers, and houses, for example. Because nature does not create them spontaneously, all of these things have to be assembled by us — either manually or using machines. And that is exactly what we have done at the level of single molecules in this experiment: with our hands, we produced an artificial metastable structure that additionally offers a certain desired functionality,” says Stefan Tautz.

The researchers already successfully used the stand-up molecule as an electron source emitting single electrons. The electron’s wave function of this sort of electron source is predetermined by the chemical properties of the molecule. Such electron sources could be used, for example, for applications in holography, which use the wave character of the emitted electrons for imaging. Thanks to experiments like this, researchers are now anticipating a productive interplay between the fabrication of unusual structures and new functionalities.

Hand control and probes for microscopes

The current research result was preceded by several scientific advances. Over the last few years, e.g., Jülich researchers succeeded in selectively plucking single molecules from aggregates and layers. The group headed by Dr. Ruslan Temirov is also working to improve the contrast and resolution of microscopes using single atoms and molecules as probes. For this purpose, individual molecules or atoms are attached as a sensor to the tip of the microscope. These then dramatically enhance the resolution with which structures and even electric fields can be imaged.