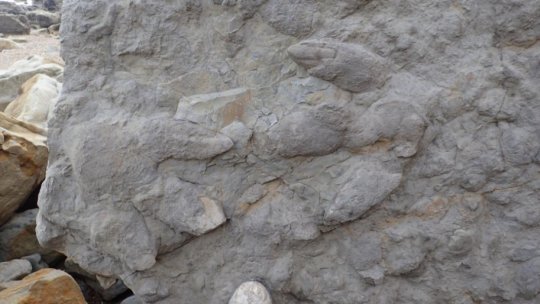 More than 85 well-preserved dinosaur footprints — made by at least seven different species — have been uncovered in East Sussex, representing the most diverse and detailed collection of these trace fossils from the Cretaceous Period found in the UK to date.

The footprints were identified by University of Cambridge researchers between 2014 and 2018, following periods of coastal erosion along the cliffs near Hastings. Many of the footprints — which range in size from less than 2 cm to over 60 cm across — are so well-preserved that fine detail of skin, scales and claws is easily visible.

The footprints date from the Lower Cretaceous epoch, between 145 and 100 million years ago, with prints from herbivores including Iguanodon, Ankylosaurus, a species of stegosaur, and possible examples from the sauropod group (which included Diplodocus and Brontosaurus); as well as meat-eating theropods. The results are reported in the journal Palaeogeography, Palaeoclimatology, Palaeoecology.

Over the past 160 years, there have been sporadic reports of fossilised dinosaur footprints along the Sussex coast, but no new major discoveries have been described for the past quarter century and the earlier findings were far less varied and detailed than those described in the current research.

The area around Hastings is one of the richest in the UK for dinosaur fossils, including the first known Iguanodon in 1825, and the first confirmed example of fossilised dinosaur brain tissue in 2016. However, trace fossils such as footprints, which can help scientists learn more about the composition of dinosaur communities, are less common in the area.

“Whole body fossils of dinosaurs are incredibly rare,” said Anthony Shillito, a PhD student in Cambridge’s Department of Earth Sciences and the paper’s first author. “Usually you only get small pieces, which don’t tell you a lot about how that dinosaur may have lived. A collection of footprints like this helps you fill in some of the gaps and infer things about which dinosaurs were living in the same place at the same time.”

The footprints described in the current study, which Shillito co-authored with Dr Neil Davies, were uncovered during the past four winters, when strong storms and storm surges led to periods of collapse of the sandstone and mudstone cliffs.

In the Cretaceous Period, the area where the footprints were found was likely near a water source, and in addition to the footprints, a number of fossilised plants and invertebrates were also found.

“To preserve footprints, you need the right type of environment,” said Davies. “The ground needs to be ‘sticky’ enough so that the footprint leaves a mark, but not so wet that it gets washed away. You need that balance in order to capture and preserve them.”

“As well as the large abundance and diversity of these prints, we also see absolutely incredible detail,” said Shillito. “You can clearly see the texture of the skin and scales, as well as four-toed claw marks, which are extremely rare.

“You can get some idea about which dinosaurs made them from the shape of the footprints — comparing them with what we know about dinosaur feet from other fossils lets you identify the important similarities. When you also look at footprints from other locations you can start to piece together which species were the key players.”

As part of his research, Shillito is studying how dinosaurs may have affected the flows of rivers. In modern times, large animals such as hippopotamuses or cows can create small channels, diverting some of the river’s flow.

“Given the sheer size of many dinosaurs, it’s highly likely that they affected rivers in a similar way, but it’s difficult to find a ‘smoking gun’, since most footprints would have just washed away,” said Shillito. “However, we do see some smaller-scale evidence of their impact; in some of the deeper footprints you can see thickets of plants that were growing. We also found evidence of footprints along the banks of river channels, so it’s possible that dinosaurs played a role in creating those channels.”

It’s likely that there are many more dinosaur footprints hidden within the eroding sandstone cliffs of East Sussex, but the construction of sea defences in the area to slow or prevent the process of coastal erosion may mean that they remained locked within the rock.

The research was funded by the Natural Environment Research Council (NERC).