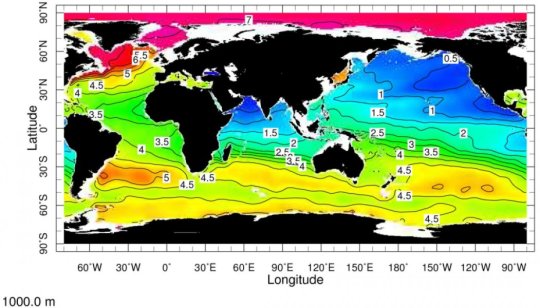 It happened once before, and it could happen again.

That’s the warning from ocean scientists at the University of Toronto and the University of California, Santa Cruz in a study published recently in Science that shows how an increase in CO2 in Earth’s atmosphere more than 50 million years ago, dramatically changed the chemistry of the planet’s oceans.

The researchers suggest if contemporary global carbon emissions continue to rise, the future of many fish species in our oceans could be at risk.

“Our study shows that global warming is not only about extreme weather events, or hotter summers, but it has the potential to alter the ocean structure with unknown consequences for fisheries,” said Professor Uli Wortmann in the Department of Earth Sciences in the Faculty of Arts & Science at U of T, and co-author of the study.

And this isn’t the first time this has happened.

“We show that the last time large amounts of CO2 were injected into the atmosphere, not only did the planet get hot — which is known as the so called Paleocene-Eocene Thermal Maximum, about 55 million year ago — but it also changed the chemistry of the ocean quite markedly,” said Wortmann. He was joined in the research by U of T PhD student Weiqi Yao, lead author of the study, and Adina Paytan of the Institute of Marine Science at the University of California, Santa Cruz.

It is widely accepted that an increase in CO2 leads to warming, which then results in less oxygen in our oceans. Less oxygen allows sulfate-eating bacteria to thrive, which produces hydrogen sulfide — a broad-spectrum toxin which is lethal in small concentrations.

“This will affect fish species that live or dive deep in the ocean,” said Wortmann. “Most notably it would impact high level predators like tuna and whales, which in turn would have a ripple effect on fish species living in the commercially more relevant shallow waters — up to 200 metres below sea level — and those living in the middle depth approximately 1,000 metres below the surface of the ocean.

“The middle and deep ocean are the largest and least explored part of our planet, home to giant squid and weird deep sea fish but also some commercially important fish like the Patagonian Toothfish, otherwise known as Chilean Sea Bass.”

The Paleocene-Eocene Thermal Maximum (PETM) gets its name from the boundary between two periods in Earth’s past. The amount of CO2 input into the atmosphere during the period was similar to the predicted trajectories of CO2 in the atmosphere towards the year 2100 adopted by the United Nations’ Intergovernmental Panel on Climate Change, if emissions continue to rise throughout the 21st century. It is viewed as a good model for the fossil fuel burning activity occurring currently and is intensely studied by scientists in the context of climate change.

In the course of exploring how ocean chemistry evolved over the last 60 million years, Yao stumbled upon some unusual data — hinted at in previous low-resolution work by Paytan — that Wortmann suggests conventional wisdom would consider faulty. Upon noticing that it coincided with the PETM interval, the authors dug deeper for more data and were able to show that it was no measurement artifact, but a real signal.

“Increased atmospheric CO2 concentrations go hand in hand with oxygen loss in the ocean, and this is the first demonstration that the CO2 release from human activity could be large enough to turn parts of the ocean into a toxic brew,” said Wortmann.

While the researchers cannot say how long it would take for the impact of increased CO2 levels to become evident, they say the transition would be quick.

“Our study is another piece in the puzzle,” said Yao. “It highlights an often overlooked aspect of the global climate change debate: what will happen to marine fisheries in a warming world?”

Materials provided by University of Toronto. Note: Content may be edited for style and length.