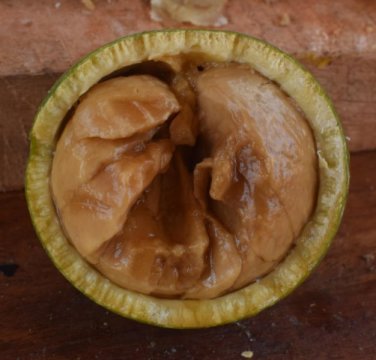 Chimpanzees are generally known as the ripe fruit specialist among the great apes but also incorporate other food items such as leaves and seedpods into their diets. Savannah chimpanzees are thought to rely on these non-fruit resources more than their forest counterparts. The mechanical properties of plant foods can vary substantially but to date there were no comparative data available for chimpanzee populations living in distinct habitat types.

Adam van Casteren of the Max Planck Weizmann Center for Integrative Archaeology and Anthropology at the Max Planck Institute for Evolutionary Anthropology went out to compare the material properties of various plant foods eaten by chimpanzees in a tropical rainforest (Ngogo, Uganda) and a savannah woodland (Issa Valley, Tanzania). Using a portable mechanical tester, he measured the physical properties of plant tissues and found that some plant parts from the mosaic savannah woodland habitat, such as the outer casing of the Strychnos fruit, had much higher toughness and stiffness values than the plant tissues he tested from the rainforest. “I was surprised to see that some values even exceed those recorded for orangutan foods as they are generally considered to consume the most mechanically challenging diet of all the great apes,” says van Casteren.

The scientists also combined their plant food mechanical data with data from a stable isotope analysis from both plant and chimpanzee hair samples. Carbon stable isotopes are commonly used to reconstruct dietary ecology and habitat use of living and extinct primates. Although the carbon isotope values of plants were remarkably similar in both habitats, the isotope data obtained from chimpanzee hair suggested that savannah chimpanzees frequently feed on plants growing in open canopy areas. These likely include those plants which are particularly demanding when processed with the teeth.

The authors believe that the consumption of such tough foods is facilitated by the large front teeth of chimpanzees. “While some chimpanzee populations are using tools to crack open nuts, others like these savannah chimpanzees still rely on their teeth to get access to nutrients. Such differences in selection pressures acting on the teeth are likely to have played a key role during the evolution of hominins,” says Kornelius Kupczik, co-author and Track Leader of the Max Planck Weizmann Center.

Dental morphology, food mechanical properties and carbon stable isotopes are all highly relevant for reconstructing past diets of our early ancestors in Africa. “If we better understand the foundations and interactions of food material properties, dental wear processes and isotopes in extant chimpanzees this opens a window into the past and helps to interpret the data obtained from fossil specimens who lived in the African savannah several million years ago,” concludes co-author Vicky Oelze from the University of California in Santa Cruz and the Max Planck Institute for Evolutionary Anthropology, who conducted the stable isotope analysis.