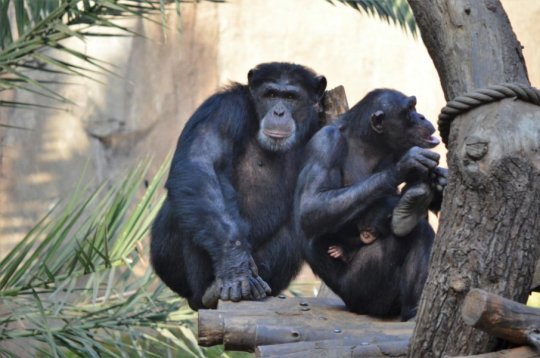 Chemical communication is widely used in the animal kingdom to convey social information. For example, animals use olfactory cues to recognize group or family members, or to choose genetically suitable mates. In contrast to most other mammals, however, primates have traditionally been regarded as “microsmatic” — having a poor sense of smell. Although research on olfaction in some primate species has increased in recent years, non-human great apes have been greatly neglected in these studies. Researchers from the University of Leipzig and the Max Planck Institute for Evolutionary Anthropology as well as Durham University have now conducted one of the first studies investigating the signaling function of social odors in non-human great apes.

The scientists presented two groups of chimpanzees with urine from group members, strangers and an unscented control in aerated plexiglass boxes and videotaped their behavior. Chimpanzees sniffed longer at urine than at the control, suggesting they perceive the odor of other chimpanzees. More importantly, they discriminated between the smell of group members and strangers, sniffing outgroup odors longer than ingroup odors. “Chimpanzees are highly territorial, and encounters between groups are mostly hostile — in fact, they sometimes kill individuals from other communities — so olfactory cues might help them to locate other animals and determine whether they are group members or strangers, enhancing their survival and leading to fitness benefits,” says lead author Stefanie Henkel of the University of Leipzig and the Max Planck Institute for Evolutionary Anthropology. “Odor might be especially important because most chimpanzees live in dense forests where visibility is low, and because in chimpanzee societies, group members split up into subgroups that may not see each other for days,” Henkel adds.

Furthermore, the researchers found that chimpanzees sniffed longer at the odor the more closely related they were to the odor donor, providing the first evidence for odor-mediated kin recognition in non-human great apes. “The ability to recognize kin is crucial, because it allows animals to choose appropriate partners for coalitions, avoid mating with close relatives, and avoid killing their own offspring,” co-author Jo Setchell explains. “There is evidence that humans can also recognize the smell of their relatives, even as newborns. We apparently retained good olfactory capabilities, although we — like our closest relatives, the chimpanzees — don’t usually scent-mark, and lack the specialized olfactory system found in many other animals. Our results help us to understand the evolution of primate chemical communication and suggest that we should pay more attention to olfaction in apes.”

“Interestingly, in the vast majority of cases, the first investigatory behavior the chimpanzees showed when they approached a box for the first time was related to olfaction, rather than touch or just visual inspection,” Henkel points out. “To me it is very surprising that research on great ape olfaction has been neglected for so long, particularly given the increasing evidence for the importance of olfaction in other primate taxa, including humans. Our results highlight the importance of the sense of smell in chimpanzees and there is great potential for future studies to investigate the full information content of different ape odor sources using chemical analyses and further behavioral experiments.”