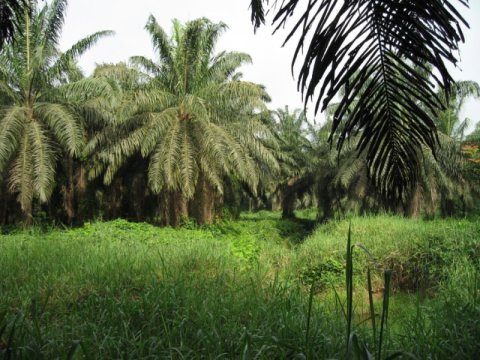 The conversion of forests to farmland is recognized as a major contributor to rising levels of greenhouse gases. And yet it hasn’t been clear how to best minimize the loss of sequestered carbon into the atmosphere. Is it better to maximize farm yields so as to use less land area over all? Or should farms be operated so as to retain more carbon on site, even at the expense of crop yields? Researchers reporting in Current Biology on July 26 say that, based on their extensive studies of agricultural operations in the humid tropics of Ghana, the dry tropical forest in Mexico, and temperate wetlands and forests in Poland, the best course in all cases is to limit the conversion of natural habitat to farmland, a strategy known as land sparing. That means maximizing yields on existing agricultural lands.

“At one extreme, farmers can try to produce all their food from as small an area of farmland as possible, by having very high yields,” says David Williams from the University of California, Santa Barbara. “This will probably reduce the amount of carbon stored on their farmland, but allows policy makers and farmers to free up more space to conserve natural habitats, where there is likely to be a lot of carbon stored. At the other extreme, farmers can try to use lower yield farming practices to increase the carbon stored on farmland, which will reduce the area of natural habitats available for conservation. And then there are all the in-between strategies that use a mix of high and low yield farmland.

“We found that the first strategy — what we call ‘land sparing’ — resulted in a greater amount of carbon being stored than any other. So, slightly counter-intuitively, trying to conserve carbon on farmland resulted in less carbon being stored across the landscape as a whole. This was because it resulted in lower yields and so required larger areas to produce the same amount of food, and therefore meant less land could be spared for natural habitats.”

To investigate the impacts of different land-use strategies, the researchers needed to have study sites across the whole range of possible land-uses, from zero-yield natural habitats through low-yield farming and then through to high-yield sites. Those sites also needed to be comparable: having the same soils, climate, slope, and more. They also needed reliable ways to measure yields — how much food each site produced per unit area — and the carbon stored on each site.

Williams and co-authors Ben Phalan and Claire Feniuk conducted field surveys of over 11,000 trees. They also conducted in-depth interviews with farmers along with using existing agricultural data to evaluate the potential impacts of different agricultural strategies on above-ground carbon stocks across a diverse range of agricultural and natural systems. To ensure that their findings would be broadly applicable, they included agroforestry and oil palm plantations in the humid tropics of Ghana, cattle ranches in dry tropical forest in Mexico, and arable cropping in temperate wetlands and forests in Poland.

“We were a bit surprised by just how consistent and how strong the result was,” Williams says. “The three systems we investigated are very different both in terms of the natural habitats and the farming systems, but in each case it was clear that land sparing — combining high-yield agriculture with preserving or restoring natural habitats — consistently had the potential to store greater amounts of carbon than any other system.”

The evidence showed clear potential benefits of land sparing for reducing the loss of carbon stocks overall. That pattern held no matter how much (or how little) food was produced. Of course, he says, those benefits hold only if the land that’s “spared” is actually used for natural habitat conservation.

The findings highlight the importance of considering the whole landscape, not just agricultural land.

“When you assess the impacts of different types of agriculture, it is vital to look at the off-farm, as well as the on-farm impacts: lower-yield farmland consistently held more carbon than high-yield farms, so it is tempting to think that it would be better for overall carbon stocks,” Williams says. “But, once you account for the greater land use required, you see that the opposite is true. We’ve got to make sure that we look at all of the impacts of food production, no matter where they are.”

Regardless of which land-use strategies are chosen going forward, the researchers say that there are sure to be big losses of carbon into the atmosphere if the amount of food produced increases. That means efforts to reduce food demand, including reducing food waste and meat consumption, will be also essential for conserving carbon stocks across the world.

Williams says they are now working to uncover policy approaches with potential to alleviate threats to biodiversity at the global scale. “Many of these revolve around reducing the area of farmland that we will need to feed the 10 billion people that the world is likely to hold in the next few decades,” he says. “So things like increasing agricultural yields, reducing meat consumption, and even leveraging trade to concentrate production in high-yield regions could all be important.