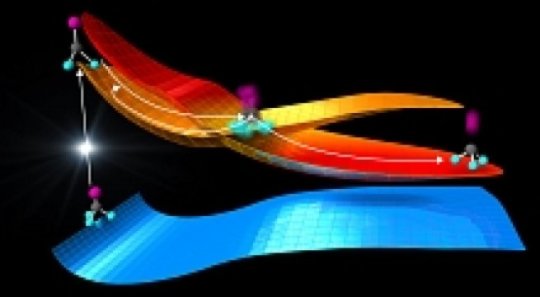 An extremely fast “electron camera” at the Department of Energy’s SLAC National Accelerator Laboratory has produced the most detailed atomic movie of the decisive point where molecules hit by light can either stay intact or break apart. The results could lead to a better understanding of how molecules respond to light in processes that are crucial for life, like photosynthesis and vision, or that are potentially harmful, such as DNA damage from ultraviolet light.

In the study, published today in Science, researchers looked at a gas whose molecules have five atoms each. They watched in real time how light stretched the bond between two atoms in the molecules to a “point of no return,” sending the molecules on a path that either further separated the atoms and cleaved the bond or caused the atoms to vibrate while preserving the bond.

“The starting and end points of a chemical reaction are often obvious, but it’s much more challenging to take snapshots of the rapid reaction steps in between,” said postdoctoral researcher Jie Yang, the study’s lead author from SLAC’s Accelerator Directorate and the Stanford PULSE Institute. “The crossroads where a molecule can do one thing or another are an important factor in determining the outcome of a reaction. Now we’ve been able to observe directly for the first time how the atomic nuclei of a molecule rearrange at such an intersection.”

Co-author Todd Martinez, a professor at SLAC and Stanford University and an investigator at PULSE, said, “The system we studied is a paradigm for the much more complex light-driven reactions in nature.” For example, the absorption of ultraviolet light can cause damage to DNA, but other mechanisms turn the light’s energy into molecular vibrations and minimize the harmful effect.

Ultra-High-Speed Snapshots of Atoms in Motion

The first steps in light-driven reactions are extremely fast. Molecules absorb light almost instantaneously, leading to a rapid rearrangement of their electrons and atomic nuclei. To see what happens in real time, researchers need ultra-high-speed cameras that can “freeze” motions occurring within femtoseconds, or millionths of a billionth of a second.

The camera used in the study was an instrument for ultrafast electron diffraction (UED), in which a high-energy beam of electrons probes the interior of a sample, generating snapshots of its atomic architecture at different points in time during a chemical reaction. Strung together, these snapshots turn into a movie of the speedy atomic motions.

At SLAC, the researchers flashed laser light into a gas of trifluoroiodomethane molecules and observed over the course of hundreds of femtoseconds how bonds between carbon and iodine atoms elongated to a point at which the bond either broke, splitting off iodine from the molecules, or contracted, setting off vibrations of the atoms along the bond.

“UED was absolutely crucial to seeing that point during the reaction,” said physicist Xijie Wang, head of SLAC’s UED program and the study’s principal investigator. “Other methods either don’t detect nuclear motions directly or haven’t reached the resolution necessary to make this kind of observation in gases.”

The observation is in agreement with calculations that provide a deeper understanding of what happens during the reaction.

The laser light “energizes” the molecules, elevating them from a low-energy ground state to a higher-energy excited state (see image below). Molecular states like these can be described by energy landscapes, with mountains of more energy and valleys of less energy. Like a golf ball rolling on a curved putting green, the molecules can follow reaction paths on these surfaces.

When the landscapes of different molecular states intersect, the reaction can proceed in several directions. Chemists call this point a conical intersection.

In fact, molecules at conical intersections exist in several states at once — an oddity rooted in the fact that molecules are tiny quantum systems, said co-author Xiaolei Zhu, a postdoctoral researcher at PULSE and Stanford. “We can predict this behavior in computer simulations,” he said. “Now we’ve also directly seen that the molecules behave exactly that way in the experiment.”

The team is now planning the next steps. “We’re continuing to develop the UED method so that we can look at similar processes in liquids,” Wang said. “This will bring us even closer to understanding light-driven chemical reactions in biological environments.”