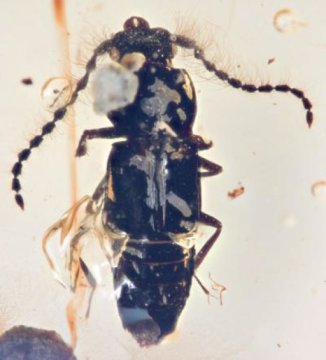 In 2016, Shuhei Yamamoto obtained a penny-sized piece of Burmese amber from Hukawng Valley in northern Myanmar, near China’s southern border. He had a hunch that the three-millimeter insect trapped inside the amber could help ansshow why our world today looks the way it does.

After carefully cutting and polishing the amber, Yamamoto determined that the insect, smaller than the phone-end of an iPhone charger, was a new species to science. The beetle, which lived 99 million years ago, is a relative of insects alive today that live under tree bark, and it’s giving scientists hints about how Earth’s landmasses were arranged millions of years ago.

“This is a very rare find,” Yamamoto said, a Field Museum researcher and lead author of a paper in the Journal of Systematic Palaeontology describing the new species. The fossil beetle is one of the oldest known members of its family — its name, Propiestus archaicus, refers to the fact that it’s an ancient relative of the flat rove beetles in the Piestus genus today of which now dominates the South America.

While dinosaurs roamed much of Earth 99 million years ago during the Late Cretaceous era, Propiestus, with its flattened body and short legs, was busy conquering smaller turf underneath the bark of rotting trees. Its long, slender antennae were the clear giveaway to Yamamoto that Propiestus was lived in this environment — similar to today’s flat rove beetles.

“The antennae probably had a highly sensitive ability as a sensory organ,” Yamamoto said. Smaller hair-like structures attached perpendicular to the antennae would have increased its ability to feel out its surroundings. “There wouldn’t have been a lot of space available in the beetle’s habitat, so it was important to be able to detect everything,” he explains.

Propiestus is just one of the hundreds of thousands of Burmese amber inclusions — another word for the objects trapped inside the amber — that scientists have extensively researched over the last 15 years. Many small insects that lived during the Cretaceous era met their maker at the hands of tree sap that engulfed the bugs and hardened into amber. The bugs trapped inside fossilized and remained frozen for millions of years, unaffected by the passage of time. The hardened amber, covered by soil, decayed leaves, and other organic material, eventually blended in with its surroundings.

Because of this, amber in nature doesn’t look like it does in jewelry — in fact, it doesn’t look like anything special at all. The small clumps of unpolished amber look like rocks, meaning only those experienced in amber identification, mostly local miners, are able to find them.

After miners extract the amber, the clumps are either sold into the jewelry trade or to scientists like Yamamoto to study the inclusions. For Yamamoto’s piece of amber, he used sandpaper to carefully polish the amber just enough to make Propiestus clearly visible.

“It was very exciting, because the cutting process is very sensitive,” Yamamoto said. “If you cut too fast or apply too much pressure, you destroy the inclusion inside very quickly.”

Once the amber was polished, the beetle was clearly visible, enabling Yamamoto and his colleagues to study the beetle and determine its closest living relatives. Propiestus‘s flat rove beetle cousins alive today are found mostly in South America, with the exception of one species in Southern Arizona. Myanmar, where Propiestus was found, is literally on the other side of the globe from these places. But it hasn’t always been that way.

Millions of years ago, Myanmar and South America were actually quite close to each other, all fused together as part of the megacontinent Gondwanaland, which formed when the earlier megacontinent Pangea broke apart. Gondwanaland itself eventually broke apart, helping to form the continents we recognize on a map today.

Scientists have a clear sense of which of today’s continents and subcontinents would have comprised Gondwanaland and which would have made up its sister continent, Laurasia. However, the detailed timing and pattern of Gondwanaland’s split into smaller continents is disputable. Searching for supporting or contrasting evidence means analyzing fossils, some as small as Propiestus, to compare their similarities to other organisms discovered across the globe that might have inhabited the same space long ago.

“Like koalas and kangaroos today, certain animals that we think lived in Gondwanaland are only found in one part of the world. Although Propiestus went extinct long ago, our finding probably shows some amazing connections between Southern Hemisphere and Myanmar,” Yamamoto said. “Our finding fits well with the hypothesis that, unlike today, Myanmar was once located in the Southern Hemisphere.”

Many inclusions in Burmese amber that have been researched in the last 15 years, including Propiestus, show signs that show traits in common with insects from Gondwanaland. By studying these tiny creatures trapped in amber, we’re finding answers to the questions surrounding Earth’s structure and the life it supported millions of years ago.

“This fossil helps us understand life in the Mesozoic era,” he said. “We need to think about everything from that time, both big and small.”