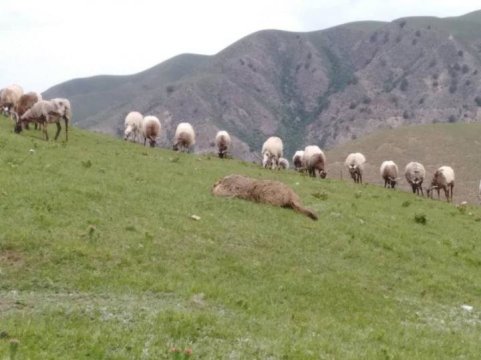 In the Qinghai-Tibet plateau, one of the region’s highest risk areas for human plague, Himalayan marmots are the primary carriers of the infectious bacterium Y. pestis. Y. pestis infection can be transmitted to humans and other animals by the marmots’ parasitic fleas. In a new study recently published with PLOS Neglected Tropical Diseases, researchers determine that Tibetan sheep, who make up about one-third of China’s total sheep population, also carry this disease and can transmit it to humans.

Since the first documented marmot fatality caused by the biovar antique strain of Y. pestis in 1954, a total of 468 human plague cases with 240 deaths have been reported. To better understand local outbreaks, Wei Li of the CDC in China and colleagues, extracted the genomic DNA from 38 strains of Y. pestis isolated from Tibetan sheep, Himalayan marmots, and humans. Y. pestis isolated from Tibetan sheep and local marmots all were found to belong to the strain of human plague, biovar antique. Creating a phylogenetic tree of the isolated Y. pestis pathogen, researchers determined the disease transferred from Himalayan marmot to sheep to human. In addition, the genomic analysis of the Tibetan sheep-related strains revealed the strains have territory-specific characteristics. When there is no geographic barrier between adjacent areas, the pathogens isolated from adjacent areas grouped together.

The exact pathway of transmission of how the bacterium transmits still needs further study. However, researchers observed that Tibetan sheep have a habit of licking the bodies of dead rodents such as marmots, possibly as a means of ingesting micronutrients in the plateau. Transmission between marmot and sheep can also occur through fleas biting marmots and then carrying the disease onward. The transmission from sheep to human is associated with the skinning, butchering, and eating under-cooked sheep meat.

“To the best of our knowledge,” the researchers note, “natural infection of sheep with Y. pestis is rare elsewhere in the world. The Tibetan sheep plague has some novel features, such as a complex transmission route, an extended epizootic period, and the possibility of transmission across long distances. Therefore, the hazards of Tibetan sheep plague should not be underestimated.”