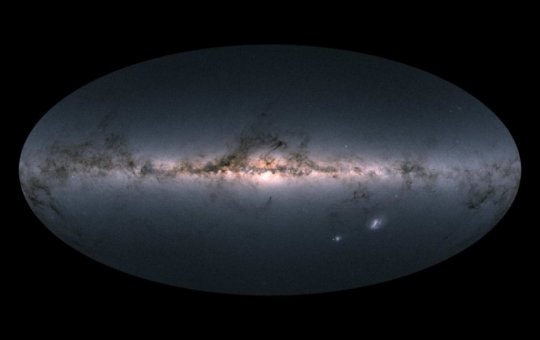 A thin gap has been discovered on the Hertzsprung-Russell Diagram (HRD), the most fundamental of all maps in stellar astronomy, a finding that provides new information about the interior structures of low mass stars in the Milky Way Galaxy, according to a study led by astronomers at Georgia State University.

Just as a graph can be made of people with different heights and weights, astronomers compare stars using their luminosities and temperatures. The HRD is a “family portrait” of the stars in the Galaxy, where stars such as the Sun, Altair, Alpha Centauri, Betelgeuse, the north star Polaris and Sirius can be compared. The newly discovered gap cuts diagonally across the HRD and indicates where a crucial internal change occurs in the structures of stars. The gap outlines where stars transition from being larger and mostly convective with a thin radiative layer to being smaller and fully convective.

The researchers estimate that stars above the gap contain more than about one-third the mass of the Sun, and those below have less mass. Because different types of stars have different masses, this feature reveals where different types of interior structures are on the HRD. The gap occurs in the middle of the region of “red dwarf” stars, which are much smaller and cooler than the Sun, but compose three of every four stars in the solar neighborhood. The findings are published in the journal The Astrophysical Journal Letters.

“We were pretty excited to see this result, and it provides us new insights to the structures and evolution of stars,” said Dr. Wei-Chun Jao, first author of the study and a staff astronomer in the Department of Physics and Astronomy at Georgia State.

In 2013, the European Space Agency (ESA) launched the Gaia spacecraft to make a census of the stars in the Milky Way Galaxy and to create a three-dimensional map. In April 2018, the ESA released results of this mission, revealing an unprecedented map of more than one billion stars in the Galaxy, a 10,000-fold increase in the number of stars with accurate distances. The research team led by Georgia State plotted nearly 250,000 of the closest stars in the Gaia data on the HRD to reveal the gap. Georgia State’s researchers have studied the distances to nearby stars for years, which enabled them to interpret the results and notice this thin gap.

The team is now working to pinpoint why the gap is present. Using results from a theoretical computer model that simulates the activity inside the stars, it appears the gap is caused by a slight shrinking in size if a star is convective all the way through.

Materials provided by Georgia State University. Note: Content may be edited for style and length.