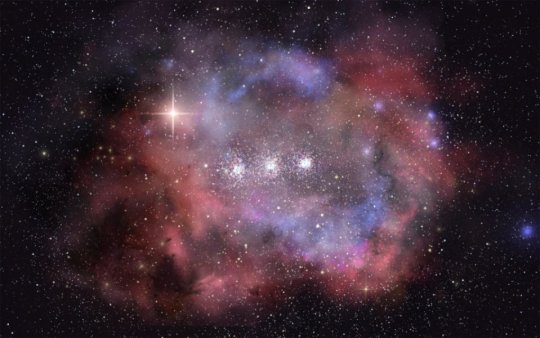 Researchers have detected a radio signal from abundant interstellar dust in MACS0416_Y1, a galaxy 13.2 billion light-years away in the constellation Eridanus. Standard models can’t explain this much dust in a galaxy this young, forcing us to rethink the history of star formation. Researchers now think MACS0416_Y1 experienced staggered star formation with two intense starburst periods 300 million and 600 million years after the Big Bang with a quiet phase in between.

Stars are the main players in the Universe, but they are supported by the unseen backstage stagehands: star dust and gas. Cosmic clouds of dust and gas are the sites of star formation and masterful storytellers of the cosmic history.

“Dust and relatively heavy elements such as oxygen are disseminated by the deaths of stars,” said Yoichi Tamura, an associate professor at Nagoya University and the lead author of the research paper, “Therefore, a detection of dust at some point in time indicates that a number of stars have already formed and died well before that point.”

Using ALMA (Atacama Large Millimeter/submillimeter Array), Tamura and his team observed the distant galaxy MACS0416_Y1. Because of the finite speed of light, the radio waves we observe from this galaxy today had to travel for 13.2 billion years to reach us. In other words they provide an image of what the galaxy looked like 13.2 billion years ago, which is only 600 million years after the Big Bang.

The astronomers detected a weak but telltale signal of radio emissions from dust particles in MACS0416_Y1 (Note 1). The Hubble Space Telescope, the Spitzer Space Telescope, and the European Southern Observatory’s Very Large Telescope have observed the light from stars in the galaxy; and from its color they estimate the stellar age to be 4 million years.

“It ain’t easy,” said Tamura half-lost in a moonage daydream. “The dust is too abundant to have been formed in 4 million years. It is surprising, but we need to hang onto ourselves. Older stars might be hiding in the galaxy, or they may have died out and disappeared already.”

“There have been several ideas proposed to overcome this ‘dust budget crisis’,” said Ken Mawatari, a researcher at the University of Tokyo. “However, no one is conclusive. We made a new model which doesn’t need any extreme assumptions diverging far from our knowledge of the life of stars in today’s Universe. The model well explains both the color of the galaxy and the amount of dust.” In this model, the first burst of star formation started at 300 million years and lasted 100 million years. After that, the star formation activity went quiet for a time, and then restarted at 600 million years. The researchers think ALMA observed this galaxy at the beginning of its second generation of star formation.

“Dust is a crucial material for planets like Earth,” explains Tamura. “Our result is an important step forward for understanding the early history of the Universe and the origin of dust.”