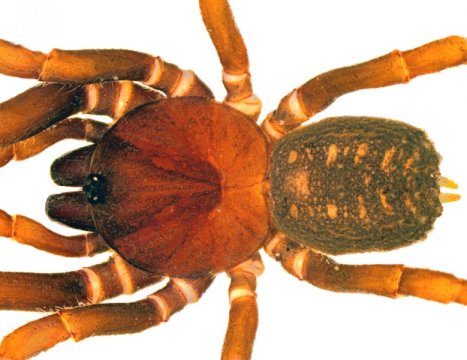 Despite being widely distributed across north and central South America, bald-legged spiders had never been confirmed in Colombia until the recent study by the team of Drs Carlos Perafan and Fernando Perez-Miles (Universidad de la Republica, Uruguay) and William Galvis (Universidad Nacional de Colombia). Published in the open-access journal ZooKeys, their research paper describes a total of six previously unknown species inhabiting the country.

Four of the novel spiders were unable to fit into any already existing genus, so the scientists had to create a brand new one for them, which they called Stormtropis in reference to the Star Wars’ clone trooper army known as Stormtroopers.

Considered to be amongst the most enigmatic in the group of mygalomorphs, the bald-legged spiders are a family of only 11 very similarly looking, small- to medium-sized species, whose placement in the Tree of Life has long been a matter of debate. In fact, it is due to their almost identical appearance and ability for camouflage that became the reason for the new bald-legged spider genus to be compared to the fictional clone troopers.

One of the most striking qualities of the bald-legged spiders (family Paratropididae) is their ability to adhere soil particles to their cuticle, which allows them to be camouflaged by the environment.

“The stormtroopers are the soldiers of the main ground force of the Galactic Empire. These soldiers are very similar to each other, with some capacity for camouflage, but with unskillful movements, like this new group of spiders,” explain the researchers.

“We wanted to make a play on words with the name of the known genus, Paratropis, and of course, we also wanted to pay tribute to one of the greatest sagas of all time,” they add.

One of the new ‘stormtrooper’ species (Stormtropis muisca) is also the highest altitudinal record for the family. It was recorded from an elevation of at least 3,400 m in the central Andes. However, the authors note that they have evidence of species living above 4,000 m. These results are to be published in future papers.

In the course of their fieldwork, the researchers also confirmed previous assumptions that the bald-legged spiders are well adapted to running across the ground’s surface. The spiders were seen to stick soil particles to their scaly backs as a means of camouflage against predators. More interestingly, however, the team records several cases of various bald-legged species burrowing into ravine walls or soil — a type of behaviour that had not been reported until then. Their suggestion is that it might be a secondary adaptation, so that the spiders could exploit additional habitats.

In conclusion, not only did the bald-legged spiders turn out to be present in Colombia, but they also seem to be pretty abundant there. Following the present study, three genera are currently known from the country (Anisaspis, Paratropis and Stormtropis).