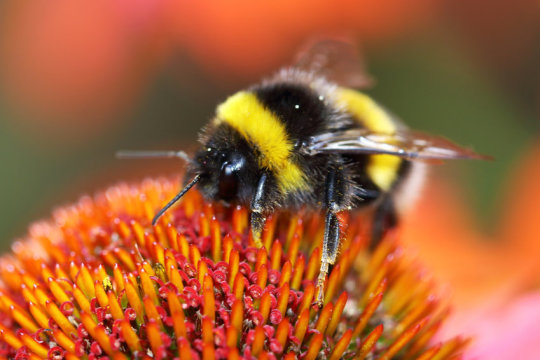 Bumblebees acquire a taste for pesticide-laced food as they become more exposed to it, a behaviour showing possible symptoms of addiction.

This study of bumblebee behaviour indicates that the risk of pesticide-contaminated food entering bee colonies may be higher than previously thought, which can have impacts on colony reproductive success.

In research published today in Proceedings of the Royal Society B, a team from Imperial College London and Queen Mary University of London (QMUL) have shown that bumblebee colonies increasingly feed on pesticide-laced food (sugar solution) over time.

The researchers tested the controversial class of pesticides the ‘neonicotinoids’, which are currently one of the most widely used classes of pesticides worldwide, despite the near-total ban in the EU. The impact of neonicotinoids on bees is hotly debated, and the ban is a decision that has received mixed views.

Lead researcher Dr Richard Gill, from the Department of Life Sciences at Imperial, said: “Given a choice, naïve bees appear to avoid neonicotinoid-treated food. However, as individual bees increasingly experience the treated food they develop a preference for it.

“Interestingly, neonicotinoids target nerve receptors in insects that are similar to receptors targeted by nicotine in mammals. Our findings that bumblebees acquire a taste for neonicotinoids ticks certain symptoms of addictive behaviour, which is intriguing given the addictive properties of nicotine on humans, although more research is needed to determine this in bees.”

The team tracked ten bumblebee colonies over ten days, giving each colony access to its own foraging arena in which bees could choose feeders that did or did not contain a neonicotinoid.

Lead author Dr Andres Arce, from the Department of Life Sciences at Imperial, said: “Many studies on neonicotinoids feed bees exclusively with pesticide-laden food, but in reality, wild bees have a choice of where to feed. We wanted to know if the bees could detect the pesticides and eventually learn to avoid them by feeding on the uncontaminated food we were offering.

“Whilst at first it appeared that the bees did avoid the food containing the pesticide, we found that over time the bumblebees increased their visits to pesticide-laden food. We now need to conduct further studies to try and understand the mechanism behind why they acquire this preference.”

Dr Gill added: “This research expands on important previous work by groups at Newcastle and Dublin Universities. Here, we added a time dimension and allowed the bees to carry out more normal foraging behaviour, to understand the dynamics of pesticide preference. Together these studies allow us to properly assess the risks of exposure and not just the hazard posed.

“Whilst neonicotinoids are controversial, if the effects of replacements on non-target insects are not understood, then I believe it is sensible that we take advantage of current knowledge and further studies to provide guidance for using neonicotinoids more responsibly, rather than necessarily an outright ban.”