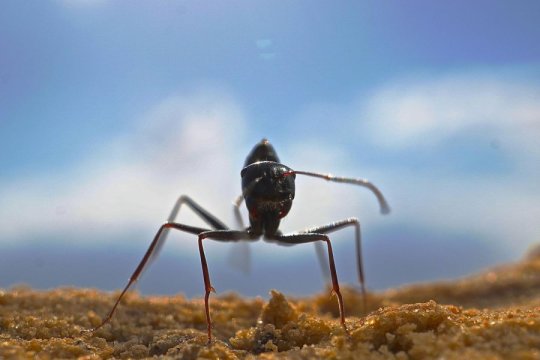 Scientists at the Max Planck Institute for Chemical Ecology used behavioral experiments to show that desert ants are able to quickly learn many different food odors and remember them for the rest of their lives. However, their memory for nest odors seems to differ from their food odor memory: Whereas food odors are learned and kept after a single contact, ants need several trials to memorize nest odors. Moreover, ants forget a nest-associated odor very quickly after it has been removed from the nest. Hence, ants process food and nest odors differently in their brains.

The desert ant Cataglyphis fortis has amazing abilities to trace food and to return to its nest in the North African desert. Its sense of smell has a central function for orientation. The ant is not only a master navigator, it is also a memory artist. Behavioral scientists Markus Knaden from the Max Planck Institute for Chemical Ecology has been studying the navigational skills of this ant species for years. Until now, he was particularly interested in how the small insects find their way back to their nest after an extensive search for food in the vast salt pans of the Tunisian Sahara. After all, the nest entrance is only a small inconspicuous hole in the desert surface. He and his team found that — apart from other factors — the specific nest odor plays a crucial role. However, during their experiments, the researchers had noticed that ants learned food odors much faster than nest odors. “Our central question was whether different types of memory exist for food and nest search. The idea to compare both learning processes popped up when we observed that the ants were able to learn food odors so incredibly fast in comparison to nest odors which need to be trained much longer,” first author Roman Huber explains.

The scientists developed a simple experiment to test the response of ants to more than 30 different food odors. They held the end of a stick which had been scented with an odor about two meters away from a foraging ant on the ground so that the wind blew the odor to the ant. At first, most odors were ignored by the ants and did not evoke any response. “After we had offered a food crumb to the ants which had been scented with one of these odors, however, the ants were almost always attracted by this odor afterwards,” Markus Knaden says. “We were amazed how quickly the ants learned food-associated odors and how long they could remember them. Even ants, that had learned an odor more than 25 days ago, were able to remember it.” In nature, most ants have a short life and are usually killed by a predator within six days. Therefore it is particularly astonishing that ants that have reached more than four times the average age could still remember what they had learned.

On the other hand, ants were not able to learn nest-associated odors as quickly as food odors. When the researchers attached a scent to the nest entrance, the ants needed five to ten trials to learn the odor as a nest cue. Only after several trainings did they concentrate their nest search on this odor. When the odor was removed from the nest and after the ants had returned to the nest a few times, they completely stopped responding to the former nest cue. In ants, odors are obviously processed differently in the brain depending on whether they are food or nest cues.

Markus Knaden provides an explanation: “The two different odor memories make sense. During its entire life, an ant encounters many different pieces of food while foraging. Since the insect finds its food mainly through olfactory cues, it is important for an ant to learn the odor of good food in order to specifically search for it later. The nest, in contrast, should always smell the same during an ant’s short life. Therefore no extraordinary memory is needed to locate the nest entrance by following olfactory cues. It is sufficient if an ant knows how the nest smelled when it left to search for food, to find it on its way home. It is unlikely that the nest odor changes while an ant is away foraging.”

The scientists now want to design lab studies to underpin the results of the behavioral experiments in the natural habitat of the desert ants. Their goal is to employ imaging techniques, like calcium imaging, to locate and visualize the different memories in the ant brain and to compare brain activities during food and nest search. “We already use similar techniques for the visualization of brain activity in flies and moths. It would be great to establish these techniques for ants as well, because ants exhibit a particularly complex behavior,” Markus Knaden says.