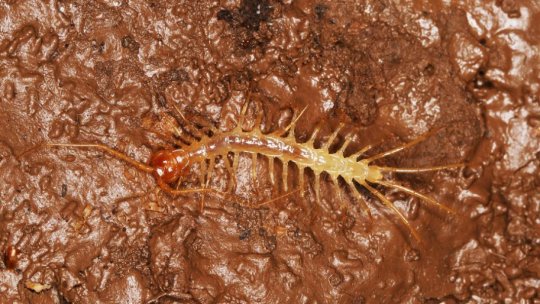 Chinese scientists recorded the first cave-dwelling centipede known so far from southern China. To the amazement of the team, the specimens collected during a survey in the Gaofeng village, Guizhou Province, did not only represent a species that had been successfully hiding away from biologists in the subterranean darkness, but it also turned out to be the very first amongst the order of stone centipedes to be discovered underground in the country.

Found by the team of Qing Li, Xuan Guo and Dr Hui-ming Chen of the Guizhou Institute of Biology, and Su-jian Pei and Dr Hui-qin Ma of Hengshui University, the new cavedweller is described under the name of Australobius tracheoperspicuus in the open-access journal ZooKeys.

The new centipede is quite tiny, measuring less than 20 mm in total body length. It is also characterised with pale yellow-brownish colour and antennae composed of 26 segments each. Similar to other cave-dwelling organisms which have evolved to survive away from sunlight, it has no eyes.

In their paper, the authors point out that Chinese centipedes and millipedes remain poorly known, where the statement holds particularly true for the fauna of stone centipedes: the members of the order Lithobiomorpha. As of today, there are only 80 species and subspecies of lithobiomorphs known from the country. However, none of them lives underground.

In addition, the study provides an identification key for all six species of the genus Australobius recorded in China.