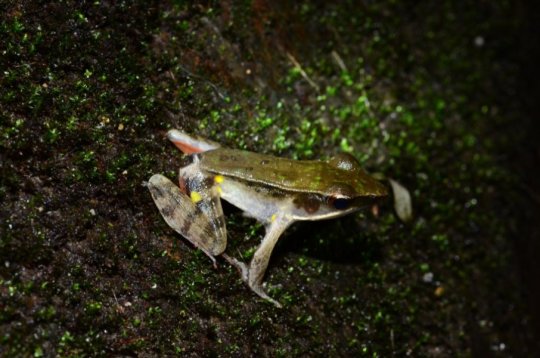 Known to science since 1857, a common species of true frog (a “true frog” is one assigned to the family Ranidae), found from north-eastern Honduras, through Nicaragua and Costa Rica to central Panama, turns out to have been keeping its “multiple identities” a secret all along.

According to British and Costa Rican herpetologists, who recently used DNA barcoding to study the species in question, what we currently call Warszewitsch’s frog is in fact a group of “cryptic” species. The study, conducted in the Área de Conservación Guanacaste (ACG), Costa Rica, by James Cryer, Dr Robert Puschendorf, Dr Felicity Wynne from the University of Plymouth, and Dr Stephen Price, UCL, is published in the open-access journal ZooKeys.

In their paper, the authors suggest that the well-known Central American frog species, commonly known as the Warszewitsch’s frog, may in fact consist of multiple different “cryptic” species. This phenomenon is well documented among tropical amphibian fauna, where high levels of genetic variation within populations of a single species surpass levels found between different, classified species.

By utilizing a technique known as DNA barcoding, which compares short snippets of DNA sequences between individuals sampled, the scientists analysed specimens from three different geographic areas within Costa Rica and Panama. In this case, the researchers used sequences derived from mitochondria, the energy-producing “power houses” found in animal cells. Their results indicated there was enough genetic variation to suggest cryptic species are indeed present.

The team chose this particular species because cryptic species were previously identified at two Panamanian sites. Now, the samples from Costa Rica broaden the study area, suggesting that there could be multiple species going by the name Warszewitsch’s frog all across its known distribution.

“The next step will be to gather more samples throughout the full range of the species. Additionally, if we are to fully discern one species variant from another, further studies that compare the physical, behavioural and ecological characteristics of the frogs, alongside more genetic testing is needed.”

Overall, findings like these are important to help improve our understanding of amphibian biodiversity and, thus, work towards its conservation.

“If indeed there are multiple species, it may be that they have different ecological requirements, and therefore different approaches to their conservation are needed.” Cryer says. “This study further reinforces the power of DNA barcoding for rapid, preliminary species identification. Especially in the tropics, where habitat loss, climate change and infectious disease continually threaten many undescribed amphibian species.”