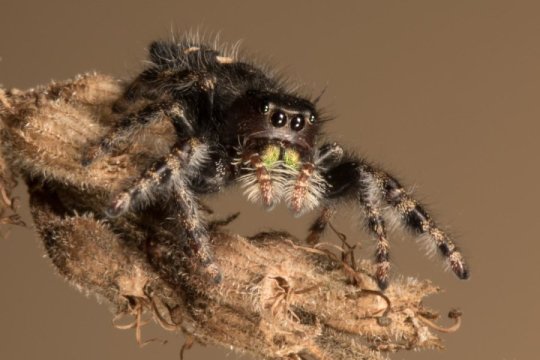 Using a specially designed eye-tracker for use with spiders, biologists Elizabeth Jakob, Skye Long and Adam Porter at the University of Massachusetts Amherst, along with colleagues in New York and New Zealand, report in a new paper that their tests in jumping spiders show a secondary set of eyes is crucial to the principal eyes’ ability to track moving stimuli.

As Jakob explains, jumping spiders have excellent vision and eight eyes. The forward-facing principal eyes are shaped like long tubes inside the spider’s head, with small, boomerang-shaped retinas that can detect color and fine details. Small retinas mean that the principal eyes also have a small field of view, she adds. To compensate, the eye tubes are surrounded by muscles that can direct the eyes to look within the visual field. She says, “I like the analogy of a flashlight beam, shining around the room and picking out only a little bit of the scene at a time.”

To see where spiders are looking, the researchers developed an eyetracker. Eyetrackers are used by psychologists to study where humans direct their gaze as they perform tasks like reading, exploring visual scenes and driving. They work by following movements of the eye’s surface. But the surface of a spider’s eye doesn’t move, so the team’s spider eyetracker is designed to look down into the eye tubes.

Without the secondary eyes, a stimulus had to appear directly in front of the principal eyes for them to be able to explore it. “It’s as if they have their peripheral vision in a completely separate eye,” Jakob says. “This level of integration, in which one eye depends on another type of eye that is morphologically very different and physically separated, is extremely unusual.”

Further, she adds, “This new tool allows us to ask all kinds of questions about how an animal with this very unusual visual system can do its tasks. For example, male jumping spiders do very elaborate courtship displays to entice females to mate. These displays might include extending the legs overhead and flicking the tips, or raising or lowering the knees, or raising the abdomen.”

In collaboration with colleagues from the University of Cincinnati, Jakob and colleagues are using the eyetracker to see exactly which parts of the display attract the attention of females, and how that differs among closely related species. Other collaborators include a Cornell group that records from the brain as the spider examines different stimuli in the eyetracker.

Jakob says, “Our work tells us something about how visual information can be collected and used to such great effect in an animal with such a small brain. It’s not a simple task even for brains as large as ours to collect and analyze visual information. With this work, we’re trying to understand how this very compact and elegant visual system works so efficiently and effectively.”