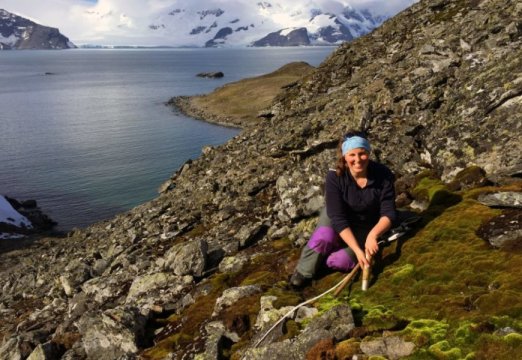 Of the known alien (non-native) species found in Antarctica, a non-biting species of midge currently presents one of the highest risks to terrestrial ecosystems, researchers have found.

Eretmoptera murphyi is a flightless midge, which is thought to have been inadvertently transferred from South Georgia (sub-Antarctic), where it is endemic, to Signy Island (maritime Antarctic) during a plant transplant experiment in the 1960s. It has since been able to establish itself with great success on Signy Island, leading to an estimated biomass 2-5 times greater than all native arthropods combined at sites where it occurs.

A research team from the University of Birmingham and the British Antarctic Survey is studying how the midge is able to survive in extreme polar conditions and the impact it may have on the region. The preliminary results, presented today at the British Ecological Society’s annual meeting in Birmingham, suggest that this single ‘decomposer’ species can lead to the release of as much nitrogen as is introduced in areas frequented by seals. On Signy Island, this equates to a three- to four-fold increase relative to areas where the midge is not found.

As an animal which feeds on dead organic matter, and with no competitors or predators on the island, E. murphyi is able to release large volumes of nutrients into the soil, which in turn will affect peat decomposition and soil structure, thereby having wider impacts on all levels of biodiversity.

“It is basically doing the job of an earthworm, but in an ecosystem that has never had earthworms,” said Jesamine Bartlett, a PhD candidate at the University of Birmingham, who will be presenting the findings at the conference.

To assess the ecological impacts of E. murphyi, the team collected information on its abundance and those of other invertebrates and microbes as well as environmental variables such as water content, organic carbon, soil nitrogen content and substrate composition. These were then compared to locations on the island where the midge did not occur.

More soil and shallower moss banks were present at sites where the midge was most abundant, suggesting that the midge is eating its way through the peat in the moss banks and turning it into soil.

Bartlett said: “This is concerning as Signy Island hosts some of the best examples of moss banks in the Antarctic region. It is also home to Antarctica’s only two flowering plant species, the hair grass and pearlwort.”

The threat of introducing invasive species into the Antarctic’s long-isolated ecosystems is growing, not least due to rapid regional warming and increased levels of human activity.

“Visitors to Antarctica are subject to increasingly strict biosecurity measures but accidental introductions continue to occur,” said Professor Peter Convey of the British Antarctic Survey. “Midge larvae, for instance, are tiny and cannot be seen easily with the naked eye. Tourists and researchers may be bringing them in from their stopovers in the sub-Antarctic and moving them around the continent in the mud on their boots.”

As part of this study, the ecologists are highlighting the risk of transferring soil and invertebrates throughout the Antarctic Treaty area and are looking at existing biosecurity protocols in order to minimise the spread of invasive species.

Dr Scott Hayward, also from the University of Birmingham, concluded: “We already know that E. murphyi is physiologically capable of surviving conditions much further south, for example on the Antarctic Peninsula, so controlling the risk of spread is critically important.”

Jesamine Bartlett will present the group’s work on 19 December 2018 at the British Ecological Society annual meeting.