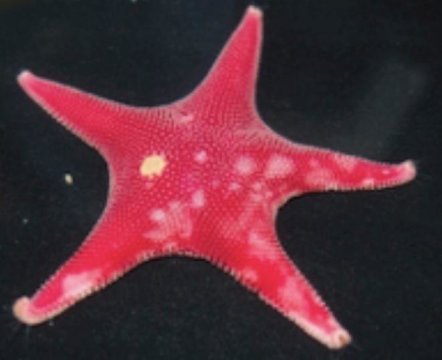 A study led by experts from the University of Barcelona’s Faculty of Biology and Institute for Research on Biodiversity (IRBio) have identified a disease that is affecting the starfish Odontaster validus, one of the most common species on the Antarctic sea floor. The disease, which is the first to be described in an echinoderm in Antarctica’s marine environment, has afflicted up to 10% of the populations of the species, which is the most important benthic predator in the coastal communities of Deception Island and other marine regions in Antarctic latitudes.

Surviving in an extreme environment

Low temperatures, ocean currents, the erosion caused by icebergs, seasonal changes in the light regime and access to food present extreme conditions that affect marine ecosystems on the Antarctic sea floor. In these extreme habitats, the starfish Odontaster validus is a plentiful species in marine substrates across a wide range of depths.

The new study expands our knowledge of the vulnerability of Antarctic benthos communities — in this case, to new diseases — and it reveals that such an emblematic starfish on the Antarctic sea floor could be under threat from a disease “that attacks the tissues of the epidermis and causes areas of discoloration (white spots), ulcerations and inflammation of tissues as deep as the subepithelial level,” according to Professor Conxita Àvila. Àvila, who teaches in the UB’s Department of Evolutionary Biology, Ecology and Environmental Sciences and works at the research institute IRBio, is the lead investigator on a number of projects investigating the ecology of marine invertebrate communities in Antarctica, including Bluebio, Distantcom, Ecoquim and Actiquim.

“The disease is not bacterial or fungal in origin,” Àvila explains. “Everything points to an infection caused by a virus or mycoplasma, which is a hypothesis that we are now studying in greater depth. We don’t know whether there is a direct relationship with the temperature, but it’s possible that there is. We’ve seen that the years with higher percentages of diseased starfish — up to 10% of the population — coincide with the years when temperatures have been extremely high. While the disease has only affected 3% of communities in other years, we don’t yet know the reasons for the variations.”

A disease affecting the starfish of Deception Island

“By contrast,” Àvila points out, “our study shows that this disease affects only the populations of the species Odontaster validus at Deception Island, indicating that its features are different from earlier descriptions in other marine regions of the globe. We’ve worked in other areas, such as the Weddell Sea, the Antarctic Peninsula and southward as far as the Rothera Research Station, and we’ve never seen any starfish, not the Odontaster validus or any other, exhibiting these signs of disease. As a result, it’s impossible to confirm whether or not there are affected individuals elsewhere.”

According to the experts, the disease could be linked to the density of specimens, which is the most common case with echinoderms in other geographical areas. Apparently, though, the disease is not transmissible between individuals. Nor does it appear to progress rapidly, although metabolic processes in Antarctic organisms are very slow and this could obscure the disease’s evolution over time.

Protecting the biodiversity of Antarctic ecosystems

The chief aims of the IRBio team are to gain a deeper understanding of the disease and its effects and, if possible, to fight its spread in Antarctic habitats. If the cause is a pathogenic, viral or mycoplasma effect that is directly related to the rise in global temperatures, the only viable strategy will be to implement all possible measures in the struggle against climate change at the individual and collective levels.

“Antarctica is now suffering from the effects of climate change and the steps that must be taken globally are extremely urgent,” Àvila warns. “If a species like Odontaster validus disappears, it will doubtless lead to very significant changes in the fauna composition of these Antarctic communities, disturbing the trophic network and upsetting the natural balance in the marine ecosystem.”

“If the disease doesn’t lead to the disappearance of the species but only to a reduction in the density of specimens, the effect won’t be so drastic. But even so, it would still affect both the remaining fauna and the relationships among organisms in Antarctica’s marine ecosystems. If the effects on the species’ physiology are minor, that is, if they only cause inactivity, reduced predation and so on, the impact will be the same but on a smaller scale,” Àvila notes, before she concludes, “In the long run, we still don’t know whether the persistence of the disease in Antarctic habitats might end up affecting other local species too.”