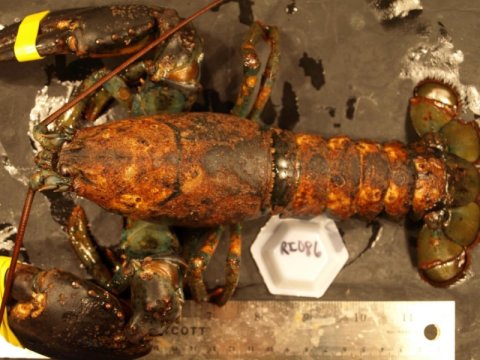 An earlier spring may sound nice, unless you’re a New England lobster.

New findings reveal that as coastal waters in the northeastern U.S. continue to warm — bottom temperatures in Long Island Sound have increased 0.7°F per decade over the last 40 years — resident lobsters are becoming increasingly susceptible to epizootic shell disease, a condition that has depleted the southern New England population and severely impacted the local lobster fishery.

The research, funded by NOAA’s Saltonstall-Kennedy Program and led by then postdoctoral associate Maya Groner of VIMS, suggests that the increased prevalence of shell disease in area lobsters stems from two factors — an earlier onset of warmth-induced spring molting, and hotter summers.

Groner and her co-authors — professors Jeff Shields and John Hoenig of VIMS along with Don Landers and John Swenarton of the Millstone Lab — published the results of their work in the most recent issue of American Naturalist.

“We used the lab’s mark-recapture dataset, now going on 37 years, to investigate relationships between temperature, molting phenology, and ESD [epizootic shell disease],” says Groner, currently a research ecologist at the Prince William Sound Science Center in Alaska. Phenology refers to the study of how plant and animal life is affected by seasonal changes.

“Our work shows that temperature increases due to climate change have caused a phenological shift in the molting patterns of lobsters, making them more susceptible to the disease,” says Groner. The team’s results pertain mostly to male and juvenile lobsters, as females have a different molting pattern, typically molting every two years in the region.

As the name implies, epizootic shell disease occurs when the bacterial populations that normally inhabit the surface of a lobster’s carapace change and begin consuming the cuticle, causing it to erode.

An earlier study by Hoenig, Groner, Shields, and colleagues using the same Millstone dataset showed that mortality due to epizootic shell disease can be as high as 70% in diseased lobsters. “This type of dataset is extremely rare,” says Shields, “and allowed us to determine that diseased lobsters have a much lower survival rate than healthy ones.”

The current study shows that when a diseased lobster molts, discarding and replacing its shell in order to grow, it essentially sets the disease clock back to zero. Thus when spring warmth — a seasonal cue for lobster molting — arrives earlier in the year, lobsters also molt earlier in the year, giving the disease a jumpstart on its progression into and through the summer months.

The research team discovered that disease prevalence in October correlates even more strongly with summer heat. In years with 90 days exceeding 68°F they detected epizootic shell disease in around 65% of lobsters, but found only 40% were diseased when the summer had 50 or fewer days above that threshold. In years with both warm springs and warm summers, disease could exceed 80%. Indeed, 2012, one of the warmest years in recent history, had the highest disease prevalence of all years for both juveniles and adult males.

In addition to the observed impacts in Long Island Sound, the researchers say their findings portend troubling possibilities for lobster populations elsewhere in the rapidly warming waters of New England.

“Recent increases in the prevalence of ESD in the Gulf of Maine — home to the largest lobster stock in the U.S. — have raised concerns that the disease is expanding northward,” says Shields. “If summer temperatures in the Gulf reach levels conducive to ESD within the next few decades — as expected under ‘business as usual’ climate projections — we’re concerned that it will lead to earlier molting in the spring and less molting during the summer, when lobsters are most susceptible to the disease.”

If that’s the case, he says, “then disease may increase substantially.”