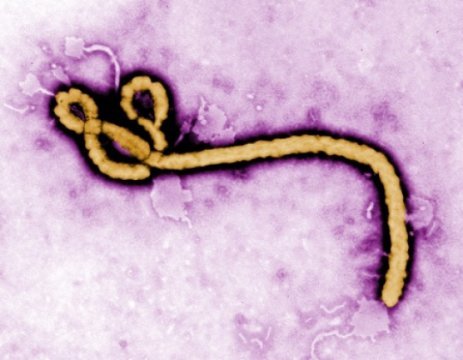 Some 18 million years ago, an ancestor of mouse-eared bats “stole” genetic material from an ancient virus related to Ebola.

The swiped genetic sequence — a gene called VP35 — has remained largely intact in the bats despite the passage of time, with few changes since it was co-opted, a new study finds. The research also sheds light on the gene’s possible function in bats, suggesting that it may play a role in regulating the immune system’s response to threats.

“We’re using a multidisciplinary approach to understand the evolution, structure and function of a viral gene co-opted by a mammal,” says Derek J. Taylor, PhD, an evolutionary biologist at the University at Buffalo. “From an evolutionary standpoint, it’s rare that you can actually see a viral gene sequence like this that has remained intact in a mammalian host. Most of these things are eroded over time — they get chopped up and shuffled around.

“But VP35 is highly conserved. It’s similar in all the bats we looked at, and the bat versions remain very close to what you see in modern Ebola and Marburg viruses. This conservation suggests that the gene has been preserved for an important purpose.”

In Ebola and Marburg viruses today, the VP35 gene carries instructions for building a protein that blocks the immune response of infected animals, enabling disease to take hold. When scientists used artificial synthesis to create bat VP35 proteins in the lab, these proteins also acted as immune suppressors, but they were less potent than viral VP35s.

“Our study explores VP35 function, but further research is needed to determine the specific evolutionary benefit,” Taylor says. “Why has this gene been conserved for so long? We don’t quite know the answer, and it’s possible that VP35 has some other function in bats that we haven’t yet discovered.”

The study will be published in the journal Cell Reports on July 24, with Megan R. Edwards, PhD, of Georgia State University as first author. The project was led by Christopher F. Basler, PhD, of Georgia State; Daisy W. Leung, PhD, of the Washington University School of Medicine; and Taylor, a professor of biological sciences in the UB College of Arts and Sciences.

Similarities — and differences — in bats and in deadly viruses

To understand VP35’s evolutionary history, the team compared VP35 sequences in 15 bat species from the genus Myotis (the mouse-eared bats), and used these sequences to reconstruct the archaic version of the gene that was first acquired by the bats’ forebear some 18 million years ago.

This analysis showed that VP35 was strikingly similar across all 15 modern bats, modern Ebola and Marburg viruses, and the reconstructed ancestral gene. In other words: VP35 has changed very little in viruses and mouse-eared bats in the last 18 million years. Bolstering this conclusion, researchers discovered that the structure of a Myotis VP35 protein and an Ebola VP35 protein were alike in many ways.

Despite these resemblances, bat and viral forms of VP35 differ in function. Lab tests showed that bat VP35 helps to suppress production of an infection-fighting immune protein called interferon beta, but less effectively than Ebola and Marburg VP35s.

“How could a bat use a viral gene that normally suppresses interferon? While we don’t know the exact answer, interferon is associated with inflammation, and it turns out that turning off the inflammation response is an important aspect of immune system function — prolonged inflammation can be harmful in mammals,” Taylor says. “So one possibility is that bats recruited a viral anti-inflammation gene to enhance control of inflammation.”

Genetic theft: How it happens and why it matters

The new study was inspired in part by Taylor’s prior work on VP35 and other “stolen” viral genes. Known as non-retroviral integrated RNA viral sequences (NIRVs), these co-opted genetic snippets are accidentally inserted into the genomes of infected hosts when a virus like Ebola or Marburg hijacks a host’s genetic machinery to replicate.

NIRVs are a gold mine of information. Taylor, one of the first scientists to study them, calls them “scars of infection” and likens them to a “viral fossil record”: You can investigate them to learn many fascinating things about the co-evolution of viruses and hosts.

In prior research, Taylor and colleagues used NIRVs to show that filoviruses — the family housing Ebola and Marburg — are ancient. The scientists also discovered that several mammals harbor the VP35 NIRV, which was originally acquired from archaic filoviruses that shared a common ancestor with Ebola and Marburg. Species that have this NIRV range from bats to hamsters, voles and wallabies.

The new project builds on this work by exploring VP35’s modern function and showing that the gene has been meticulously conserved through evolution in mouse-eared bats.

“NIRVs can tell you something about the timescale of virus-host interactions, and they can tell you something about what types of hosts are being affected by a virus,” Taylor says. “Now we’re using them in this present study to inform functional studies. NIRVs are a fairly new area of study, and it’s exciting to see what else we can learn from them.”