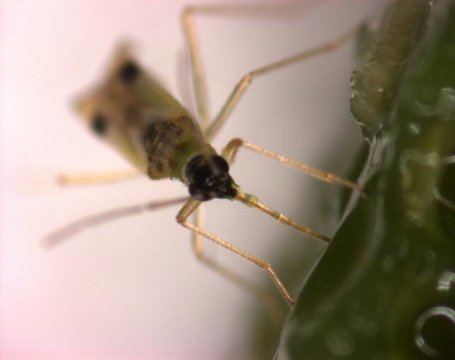 Researchers at the Max Planck Institute for Chemical Ecology, Germany, show for the first time that free-living, sap-sucking bugs can manipulate the metabolism of their host plants to create stable, nutritious feeding sites.

The discovery, published in eLife, shows that the bugs achieve this by copying plant hormones and injecting them into the leaves. They use a similar feeding strategy to endophytic insect species, which live inside plants. These findings could aid in the development of effective pest management strategies.

Free-living insects are able to move between and feed from different plants in the wild, unlike their less mobile endophytic counterparts, which spend a large part of their lives in a restricted area of the plant, often inside the tissues. When plants are targeted by bugs that depend on them for food and shelter, they often rely on defence responses that deter their attackers. However, some insects manipulate these mechanisms to counter the plants’ defence and even create a better nutritional environment around feeding sites. Until now, it was believed that only endophytic insects employed this strategy.

“It is widely thought that endophytic insects modify their hosts’ physiology using a plant hormone called cytokinin (CK),” explains lead author Christoph Bruetting, a postdoctoral researcher at the Max Planck Institute for Chemical Ecology. “These hormones can transform a plant organ that normally produces sugars — such as a mature leaf — into a kind of ‘sink’ where sugars are stored or consumed. This suggests manipulating CK could be an endophytic insect’s way of creating local metabolic sinks in the tissues they infest. However, there was previously nothing to demonstrate that any insect can transfer CKs to a plant.”

To investigate this further, Bruetting and his team looked at how the coyote tobacco plant (Nicotiana attenuata) responded to infestation with the free-living insect Tupiocoris notatus (T. notatus), one of its most common enemies in nature. The scientists developed an isotopic labelling technique which allowed them to see clearly that T. notatus flies inject CK into attacked leaves to manipulate the plant’s metabolism.

During a small infestation, where only 20 insects were able to feed on a leaf at one time, the team found that the overall nutritional quality of the leaf was not altered, although the feeding damage was severe. When the plants experienced a more extreme infestation, the protein levels in the attacked leaves decreased, but their sugar and starch contents remained the same.

“This marginal influence on nutrient levels could be due to nutrients from unattacked tissues being allocated to the injured tissue,” says senior author Ian Baldwin, Director of the Max Planck Institute for Chemical Ecology and Head of its Department of Molecular Ecology. “If this is correct, then T. notatus feeding likely causes the kind of sugar ‘sinks’ that only endophytic species were thought to create during feeding.”

Baldwin adds that further studies on T. notatus and CK transfer will provide new insight on the complex interactions that occur during plant-herbivore interactions, which could help with developing new strategies to increase crop tolerance to insect attacks.