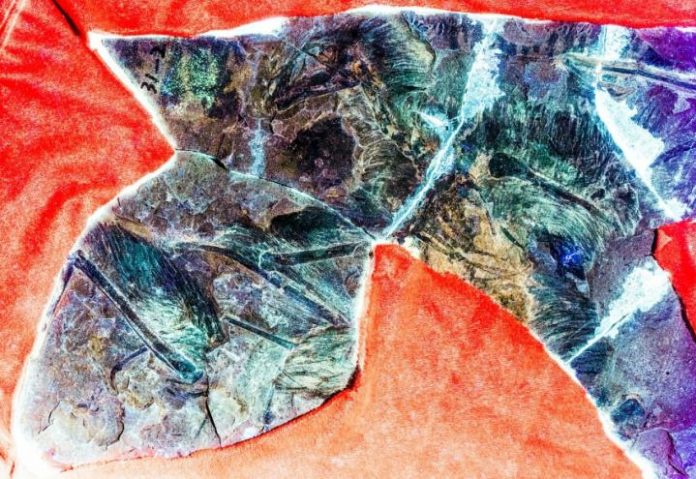 Research Assistant Professor Dr Michael PITTMAN (Vertebrate Palaeontology Laboratory, Division of Earth and Planetary Science & Department of Earth Sciences) at The University of Hong Kong (HKU), recently showed that powered flight potential evolved at least three times and that many ancestors of close bird relatives neared the thresholds of powered flight potential, suggesting broad experimentation with wing-assisted locomotion before flight evolved (see Notes). In a new study, Dr Pittman and Dr Thomas DECECCHI, Assistant Professor of Biology at Mount Marty University, broadened their collaboration on flight origins research to the scansoriopterygids, a rare group of theropod dinosaurs believed to glide using strange bat-like wings. Living around 160 million years ago in what is now northern China, they weighed about 1kg and probably feed on insects, seeds, and other plants. For the first time, Dr Dececchi, Dr Pittman and the rest of the international team tested this gliding hypothesis through quantitatively reconstructions of scansoriopterygid flight capabilities. If confirmed, this bat-winged gliding lifestyle will be unique to scansoriopterygids as it is not found in any other dinosaurs. It would also make scansoriopterygids the most distantly related theropod dinosaurs to birds that could glide. Thus, testing this gliding hypothesis is important for understanding how flight evolved among theropod dinosaurs.

Scansoriopterygids were an evolutionary dead-end

To do this, fossils were scanned using Laser-Stimulated Fluorescence (LSF), a laser-based imaging technique co-developed at HKU, which can reveal bone and soft tissue details that can’t be seen under standard white light. The team then used mathematical models to predict how scansoriopterygids might have flown, testing many different variables, including weight, wingspan, and muscle placement. They found that scansoriopterygids did not have powered flight potential but were capable of clumsy gliding. “They could glide, but they weren’t very good at it. If I were them I would have been particularly worried about predators!” says Dr Pittman. Scansoriopterygids were not part of the independent originations of powered flight in dinosaurs, which happened at least three times: once in birds and twice in dromaeosaurid ‘raptors’. Their poor gliding capabilities and existence in a short interval of time suggests that they were an evolutionary dead-end. But what exactly doomed this strange experiment? “The two scansoriopterygid species we studied were so poorly capable of being in the air that they just got squeezed out,” says Dr Thomas Dececchi. “Maybe you can survive a few million years underperforming, but with birds, pterosaurs, gliding mammals all around, scansoriopterygids were simply squeezed out until they disappeared.”

Gliding is not an efficient form of flight as it can only be done if the scansoriopterygids are already at a high point. However, it did help keep them out of danger. “If an animal needs to travel long distances, gliding costs a bit more energy at the start, but it’s faster. It can also be used as an escape hatch. It’s not a great thing to do, but sometimes it’s a choice between losing a bit of energy and being eaten,” says Dececchi. “Once scansoriopterygids were put under pressure, they just lost their space. They couldn’t win on the ground. They couldn’t win in the air. They were done.” The new findings support the emerging picture that dinosaurs evolved flight in several different ways before modern birds evolved. Asked about future plans, Pittman added, “Our team continues to uncover a greater sense of the breadth of experimentation involved in getting dinosaurs into the air. We plan to reveal even more details moving forward, particularly the different routes taken by dinosaurs to occupy the skies.”

The paper ‘Aerodynamics show membranous-winged theropods were a poor gliding dead-end’ is published in iScience and can be accessed here: https://www.cell.com/iscience/fulltext/S2589-0042(20)30766-5

2. Landmark HKU-led volume on past progress and new frontiers in the study of early birds and their close relatives (August 2020):

3. Most close relatives of birds neared the potential for powered flight but few crossed its thresholds (August 2020):

8. Scientists reveal how dinosaurs became able to shake their tail feathers (May 2013):