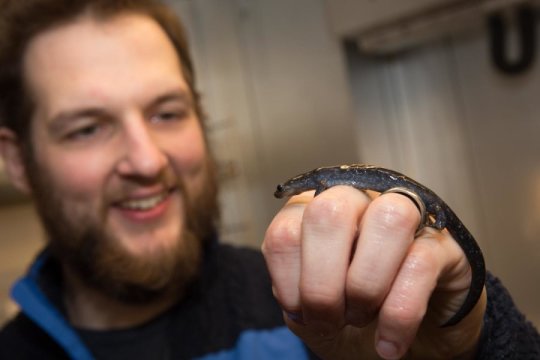 The reproductive history of the unisexual, ladies-only salamander species is full of evolutionary surprises.

In a new study, a team of researchers at The Ohio State University traced the animals’ genetic history back 3.4 million years and found some head-scratching details — primarily that they seem to have gone for millions of years without any DNA contributions from male salamanders and still have managed to persist. The research appears in the journal Evolution.

First, a bit about the unisexual Ambystoma salamander: They’re female, and they reproduce mainly through cloning and the occasional theft of another salamander species’ sperm, which the males of sexual species deposit on leaves and twigs and the like. When this happens, it stimulates egg production and the borrowed species’ genetic information is sometimes incorporated into the genome of the unisexual salamanders, a process called kleptogenesis.

Scientists who study these amphibians and their relatives, which are also called mole salamanders, have theorized that the theft of sperm is part of what has kept the unisexuals around so long. If all they ever did was clone themselves, biologists reason, they’d be vulnerable to all kinds of problems that unfold when you don’t mix up the DNA pool and would disappear from the earth fairly quickly.

Going into the study, the Ohio State team figured this sperm-borrowing happened with regularity throughout history, said study co-author H. Lisle Gibbs, a professor of evolution, ecology and organismal biology.

But findings revealed that the salamanders rarely dip into the other-species pool for genetic variation.

“This research shows that millions of years went by where they weren’t taking DNA from other species, and then there were short bursts where they did it more frequently,” said Rob Denton, who led the project as an Ohio State graduate student and is currently a postdoctoral researcher at the University of Connecticut.

“Surprisingly, it doesn’t look like they’re suffering any ill genetic effects. It’s a mysterious scenario that an animal can avoid sexual reproduction for millions of years and not suffer the consequences of that.”

Using newly available technologies and a novel and complex approach to sequence and evaluate about 100 DNA samples from the salamanders, the Ohio State researchers developed a genetic blueprint for what unfolded in the last 3.4 million years.

“When interbreeding happens, or there are adaptations to new changing environmental conditions, that all gets captured in the patterns of their genetic variation,” Denton said.

Under normal circumstances in nature, one would expect these salamanders to be long-gone, Gibbs said.

“Most asexual lineages blink out after 100,000 years. We think these have been around for 5 million years,” he said.

A puzzling detail that emerged in the study is that the sampling of DNA from other species appears to have increased in frequency in recent times, he said.

“The reasons for this are sort of tantalizing, and make you wonder: Did this happen because of some sort of environmental change or specific interactions with other species? We don’t know those answers but now we have some provocative questions,” Denton said.

He also noted that the evolutionary history of the unisexual salamander is far different from the history of other unisexual species, such as Amazon mollies.

“The mollies live fast and die hard, in less than a year, but these salamanders live slow and for long periods of time, into their 20s and 30s. And they reproduce every few years,” Denton said.

“These salamanders are just sort of plodding through evolutionary time doing strange and surprising things.”

The researchers noted that the study looked only at salamander DNA samples from Ohio and Michigan, so it’s unclear if the same patterns would be seen throughout Eastern North America and Canada, where the unisexual Ambystoma is also common.

Gibbs said it’s possible that this research could inform other areas of study, including plant science, because many plants are — like the unisexual salamanders — polyploid organisms. That means that they have more than two sets of chromosomes.

“If we can find patterns in common with these plants and animals, it would help us understand how these organisms evolve and how the molecular machinery of species with more than two sets of chromosomes works,” Gibbs said.