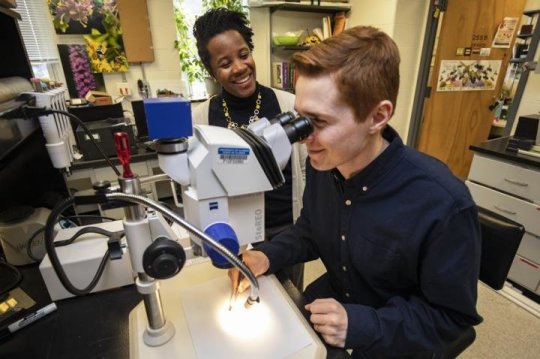 Results from a new study suggest that bees might be exposed to pesticides in more ways than we thought, and it could impact their development significantly.

While these previous studies have shown that pesticide consumption by honey and bumble bees can have important ecological consequences, this new study is one of the first of its kind to determine the effects of contact with pesticides, such as those that occur in soils, that other bee species might encounter.

“This is an important piece of work because it’s one of the first studies to look at realistic concentrations of pesticides that you would find in the soil as a route of exposure for bees. It’s a very under-explored route, especially for some of the more solitary species that nest in the ground,” said Nick Anderson, graduate student in entomology, led the study with his advisor, Alex Harmon-Threatt, professor of entomology.

A key difference between ground-nesting bees and their honey and bumble bee cousins is their smaller nest sizes (both in size and number of bees) which are made by digging into the soil. Bee species that nest this way can stay in the ground up to 49 weeks out of the year, emerging for only 3 weeks to forage, mate, and lay eggs. This leaves a lot of time for the bees to be exposed to the chronic, low levels of pesticides found in the soil after agricultural land use.

The researchers were particularly interested in a class of pesticides called neonicotinoids. Derived from nicotine, neonicotinoids are widely used for their effectiveness against insects such as Japanese beetles and emerald ash borers, but they can be toxic to pollinators. They also have a long half-life, meaning they can persist in the soil for long periods of time. Anderson and Harmon-Threatt used bees that are very close relatives to ground-nesting species because they are better suited for testing in the lab and have been used in previous research to approximate impacts on ground-nesting species.

When the bees were exposed to neonicotinoids in the lab, the researchers looked at levels similar to those found in the field. Results showed that females grew larger and did not live as long, while males were smaller and lived much longer. This conclusion suggests that chronic and low-level exposure to pesticides might cause a hormetic response in bees, where, at low levels of pesticide exposure, bees appear to benefit in small ways. However, the long-term impacts of some of these changes might not be readily apparent. The researchers believe that these lower doses are causing changes in the bee’s development, such as diverting energy from normal developmental processes to fortify physical and biochemical barriers to counter the effects of the pesticide.

“When you’re doing neonicotinoid work on something like bees, I think people expect the conclusions to say whether it’s good or it’s bad, but a lot of the relationships we’re seeing are more complicated than that. There are a lot of factors and developmental processes that can be affected,” said Harmon-Threatt.

“As we develop new pesticides, we have to be able to understand the effects,” said Anderson. “Our work is part of that kind of risk assessment. We want to know what the implications are for ground-nesting bees so that when we’re using the land for agriculture or trying to restore it, we can minimize the impact on these species.”

This study lays the foundation for the work that the Harmon-Threatt lab will be expanding upon in the field over the next five years. In 2018, Harmon-Threatt received a $1 million grant from the US Department of Agriculture’s National Institute of Food and Agriculture to conduct research to better understand the role that soil contamination plays in bee diversity and conservation.