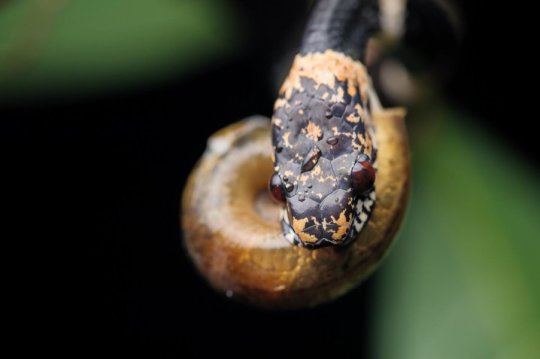 New research led by the American Museum of Natural History has uncovered five new species of snakes in Ecuador and Peru with peculiar dining etiquette: they suck the viscous bodies of snails out of their shells. The new species, most of which are considered endangered or vulnerable, are described in a study published today in the journal Zookeys, which also includes a new evolutionary tree for the diverse group of snail eaters in Central and South America.

“Believe or not, there is an entire group of snakes for which snails are food from the gods,” said lead author Alejandro Arteaga, a comparative biology Ph.D.-degree student in the Museum’s Richard Gilder Graduate School. “But sadly, four of the five species we discovered are already facing the possibility of becoming extinct, as the forests remaining for them to survive are almost completely destroyed.”

With more than 70 currently recognized species, snail-eating snakes are among the most diverse groups of tree-dwelling snakes. These snakes possess uniquely modified jaws, which give them the ability to suck the slimy body of a snail from its shell.

Arteaga collaborated with Alex Pyron from The George Washington University to conduct a series of expeditions to rainforests in Ecuador between 2013 and 2017, which led to the discovery of three of the five new species: Dipsas bobridgelyi, considered endangered under International Union for Conservation of Nature (IUCN) criteria, Sibon bevridgelyi, considered vulnerable; and Dipsas klebbai. During the same period of time, two new species were also found in dry forests by scientists based in Ecuador and Peru: Dipsas oswaldobaezi and Dipsas georgejetti, both considered vulnerable.

The most threatened of the newly discovered species, D. bobridgelyi, is known only from four patches of forest lacking connectivity between them, and its habitat is severely fragmented and declining in extent and quality due to deforestation. Only two of the localities where D. bobridgelyi is found — the Buenaventura Reserve in Ecuador and the Tumbes National Reserve in Peru — are currently protected.

To confirm these five snakes as new species, the researchers gathered measurements from more than 200 museum specimens and extracted DNA from nearly 100 individual snakes. They also used the data to build an evolutionary tree that includes 43 snail-eating snake species, 24 of which hadn’t been included in previous analyses. In addition to describing the five new species and redefining limits of genera, species, and species groups among the snakes, the researchers made changes to the known geographic distribution of several Andean species. But they note that more work lays ahead.

“Our results and the results of other recent researchers indicate that more taxonomic changes are needed,” Arteaga said. “And we suspect that there are numerous additional species to be described across all genera of this group. Unfortunately, our time to find them is likely running short. These snakes are harmless to humans, but humans are not harmless to them.”

Materials provided by American Museum of Natural History. Note: Content may be edited for style and length.