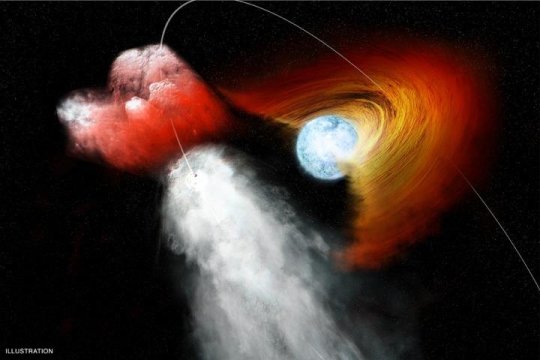 Data recorded by NASA’s Chandra X-ray Observatory of a neutron star as it passed through a dense patch of stellar wind emanating from its massive companion star provide valuable insight about the structure and composition of stellar winds and about the environment of the neutron star itself. A paper describing the research, led by Penn State astronomers, appears January 15, 2019, in the journal, Monthly Notices of the Royal Astronomical Society.

“Stellar winds are the fast-flowing material — composed of protons, electrons, and metal atoms — ejected from stars,” said Pragati Pradhan, a postdoctoral researcher in astronomy and astrophysics at Penn State and the lead author of the paper. “This material enriches the star’s surroundings with metals, kinetic energy, and ionizing radiation. It is the source material for star formation. Until the last decade, it was thought that stellar winds were homogenous, but these Chandra data provide direct evidence that stellar winds are populated with dense clumps.”

The neutron star observed is part of a high-mass X-ray binary system — the compact, incredibly dense neutron star paired with a massive ‘normal’ supergiant star. Neutron stars in binary systems produce X-rays when material from the companion star falls toward the neutron star and is accelerated to high velocities. As a result of this acceleration, X-rays are produced that can inturn interact with the materials of the stellar wind to produce secondary X-rays of signature energies at various distances from the neutron star. Neutral — uncharged — iron atoms, for example, produce fluorescence X-rays with energies of 6.4 kilo-electron volts (keV), roughly 3000 times the energy of visible light. Astronomers use spectrometers, like the instrument on Chandra, to capture these X-rays and separate them based on their energy to learn about the compositions of stars.

The researchers also used the Chandra’s state-of-the-art engineering to identify a lower limit on the distance from the neutron star that the X-rays from neutral iron are formed. Their spectral analysis showed that neutral iron is ionized at least 2.5 light-seconds, a distance of approximately 750 million meters or nearly 500,000 miles, from the neutron star to produce X-rays.

“In this work, we see a dimming of the X-rays from the neutron star and a prominent line from neutral iron in the X-ray spectrum — two signatures supporting the clumpy nature of stellar winds,” said Pradhan. “Furthermore, the detection of Compton shoulder has also allowed us to map the environment around this neutron star. We expect to be able to improve our understanding of these phenomenon with the upcoming launch of spacecrafts like Lynx and Athena, which will have improved X-ray spectral resolution.”

Pradhan and her team also have a follow-up campaign looking at the same high-mass X-ray binary with another NASA satellite — NuSTAR, which will cover a broader spectrum of X-rays from this source ranging in energies from ~ 3 to 70 keV — in May 2019.

“We are excited about the upcoming NuSTAR observation too,” said Pradhan. “Such observations in hard X-rays will add another dimension to our understanding of the physics of this system and we will have an opportunity to estimate the magnetic field of the neutron star in OAO 1657-415, which is likely a million times stronger than strongest magnetic field on Earth.”