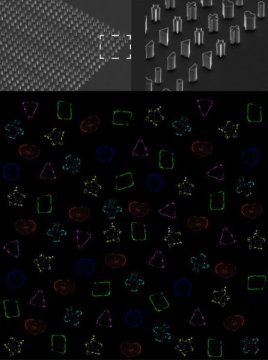 What do watermelons and bacteria have in common? Just like the tasty fruit, microbes can be molded into unusual shapes, a study in Nature Communications has shown. The paper, produced by researchers at the Okinawa Institute of Science and Technology Graduate University (OIST), has modified the structure of bacterial cells from simple rods into elaborate shapes not seen in nature, showing just how robust these life forms can be.

The study centers around the FtsZ protein, a main regulator of cell division in bacteria. Early in the division process, FtsZ acts as a scaffolding protein around which other cell division proteins assemble. During the process, thousands of FtsZ molecules come together in the middle of the cell and form multiple complexes in a circle-like structure known as the Z-Ring.

In the model bacterium Escherichia coli, Z-rings are produced at the site of cell division. But Dr. Bill Söderström of the Structural Cellular Biology Unit wondered if that would always be the case under all circumstances: “This ring forms along the circumference at the midcell, but I wanted to know how important cell shape itself is in creating that. If the cell wasn’t rod-shaped, would the Z-ring still be round?”

In essence, Dr. Söderström wondered if he could square a circle. Inspired by seeing watermelons grow into box shapes, his first step was to see if he could get rod-shaped bacterial cells to grow into cubes. The technology already existed: previous studies conducted at OIST had utilized a micro-scale frame that had successfully been used to place bacterial cells upright, instead of flat against the surface of an agarose pad — similar to the way eggs sit upright in an egg box.

These frames were constructed by Dr. Alexander Badrutdinov in OIST’s Microfabrication lab, so Dr. Söderström asked if the design could be modified to use a square shape. One simple modification later, the team introduced the growing bacterial cells to their new boxy homes. The team then added chemicals that lowered the structural integrity of the cells, easing them into the irregular shape of the molds.

Just like the watermelons, the bacteria adapted to their new environment and grew into box shapes — and the Z-rings were now Z-squares. From there, the possibilities opened up: what other shapes could the rings be molded into? New nanofabricated frames were constructed. Hearts, triangles, pentagons, crosses, half-moons and even star shapes were produced, and the bacteria set in each. Every shape successfully molded the bacteria and their Z-rings.

“Really, we ended up doing these extra shapes for fun,” laughed Dr. Söderström, “yet there’s very fundamental science at the heart of it.”

The simplicity is deceptive. Dr. Söderström’s observations tell us about very basic biology that is fundamental to how these cellular structures are formed. The study demonstrates that these cells can cope with growing and forming division rings in very restrictive conditions. It’s a simple piece of science, but it could have bigger ramifications for future research.

Many antibiotics target cellular functions closely related to cell division and the FtsZ-maintained scaffold. When looking for approaches for developing new antibiotics, one would need to look elsewhere than at cell shape. “Our study shows that the Z-ring is incredibly robust — geometry isn’t an obstacle to ring formation,” said Dr. Söderström.

While the shapes the bacteria can take on might be surprising, it’s no shock to see just how adaptable this form of micro-life is — and in an age of antibiotic resistance, it’s a timely reminder of the resilience scientists face in finding ways to combat them.