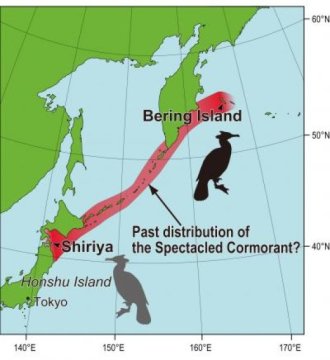 Scientists report that a large, extinct seabird called the spectacled cormorant, Phalacrocorax perspicillatus — originally thought to be restricted to Bering Island, far to the north — also resided in Japan nearly 120,000 years ago.

Writing in The Auk Ornithological Advances, the team indicates that the species under-went a drastic range contraction or shift, and that specimens found on Bering Island are ‘relicts’ — remnants of a species that was once more widespread.

The global threat of human activity on species diversity is grave. To correctly assess related extinction events, it is imperative to study natural distributions before first contact with humans. This is where archaeological and fossil records play crucial roles.

The spectacled cormorant, a large-bodied seabird first discovered in the 18th century on Bering Island, was later driven to extinction through hunting, following colonization of the island by humans in the early 1800s.

“Before our report, there was no evidence that the cormorant lived outside of Bering Island,” explains first author Junya Watanabe of Kyoto University’s Department of Geology and Mineralogy.

“It became clear that we were seeing a cormorant species much larger than any of the four native species in present-day Japan,” states co-author Hiroshige Matsuoka. “At first we thought this might be a new species, but these fossils matched bones of the specta-cled cormorant stored at the Smithsonian Institution.”

Changes of oceanographic conditions may be responsible for the local disappearance of the species in Japan. Paleoclimate studies show that oceanic productivity around Shiriya dropped drastically in the Last Glacial Maximum, around 20,000 years ago. This would have seriously affected the population of the cormorant.

Although it might be possible that hunting of the species by humans took place in pre-historic Japan, archaeological evidence of this has yet to be discovered. The entire picture of the extinction event of the spectacled cormorant may be more complex than previously thought.

“The cormorant was a gigantic animal, its large size thought to have been achieved through adaptation to the island-oriented lifestyle on Bering,” adds Watanabe. “But our finding suggests that this might not have been the case; after all, it just resided there as a relict. The biological aspects of these animals deserve much more attention.”