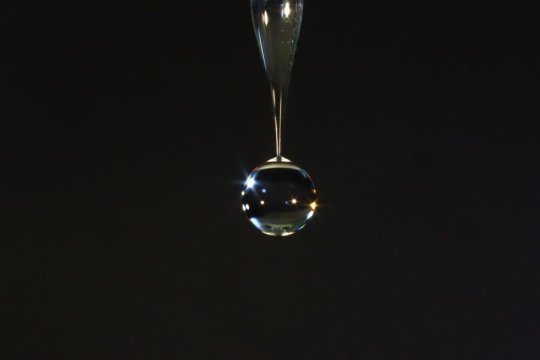 Harvard University researchers have developed a new printing method that uses sound waves to generate droplets from liquids with an unprecedented range of composition and viscosity. This technique could finally enable the manufacturing of many new biopharmaceuticals, cosmetics, and food and expand the possibilities of optical and conductive materials.

“By harnessing acoustic forces, we have created a new technology that enables myriad materials to be printed in a drop-on-demand manner,” said Jennifer Lewis, the Hansjorg Wyss Professor of Biologically Inspired Engineering at the Harvard John A. Paulson School of Engineering and Applied Sciences and the senior author of the paper.

Lewis is also a Core Faculty Member at the Wyss Institute for Biologically Inspired Engineering and the Jianming Yu Professor of Arts and Sciences at Harvard.

The research is published in Science Advances.

The viscosity of these fluids also changes dramatically with temperature and composition, makes it even more difficult to optimize printing parameters to control droplet sizes.

“Our goal was to take viscosity out of the picture by developing a printing system that is independent from the material properties of the fluid,” said Daniele Foresti, first author of the paper, the Branco Weiss Fellow and Research Associate in Materials Science and Mechanical Engineering at SEAS and the Wyss Institute.

To do that, the researchers turned to acoustic waves.

Thanks to gravity, any liquid can drip — from water dripping out of a faucet to the century-long pitch drop experiment. With gravity alone, droplet size remains large and drop rate difficult to control. Pitch, which has a viscosity roughly 200 billion times that of water, forms a single drop per decade.

To enhance drop formation, the research team relies on generating sound waves. These pressure waves have been typically used to defy gravity, as in the case of acoustic levitation. Now, the researchers are using them to assist gravity, dubbing this new technique acoustophoretic printing.

The researchers built a subwavelength acoustic resonator that can generate a highly confined acoustic field resulting in a pulling force exceeding 100 times the normal gravitation forces (1 G) at the tip of the printer nozzle — that’s more than four times the gravitational force on the surface of the sun.

This controllable force pulls each droplet off of the nozzle when it reaches a specific size and ejects it towards the printing target. The higher the amplitude of the sound waves, the smaller the droplet size, irrespective of the viscosity of the fluid.

“The idea is to generate an acoustic field that literally detaches tiny droplets from the nozzle, much like picking apples from a tree,” said Foresti.

The researchers tested the process on a wide range of materials from honey to stem-cell inks, biopolymers, optical resins and, even, liquid metals. Importantly, sound waves don’t travel through the droplet, making the method safe to use even with sensitive biological cargo, such as living cells or proteins.

“Our technology should have an immediate impact on the pharmaceutical industry,” said Lewis. “However, we believe that this will become an important platform for multiple industries.”

“This is an exquisite and impactful example of the breadth and reach of collaborative research,” said Dan Finotello, director of NSF’s MRSEC program. “The authors have developed a new printing platform using acoustic-forces, which, unlike in other methods, are material-independent and thus offer tremendous printing versatility. The application space is limitless.”

The Harvard Office of Technology Development has protected the intellectual property relating to this project and is exploring commercialization opportunities.

This research was co-authored by Katharina Kroll, Robert Amissah, Francesco Sillani, Kimberly Homan and Dimos Poulikakos. It was funded by Society in Science through the Branco Weiss Fellowship and the National Science Foundation through Harvard MRSEC.