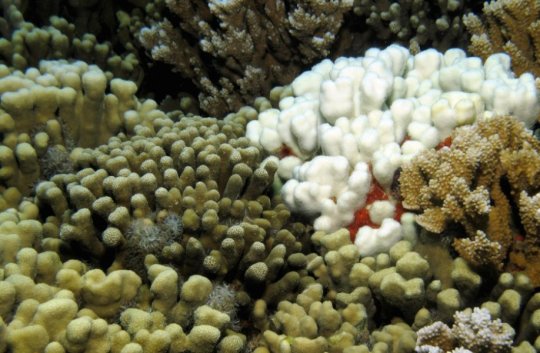 Climate change and ocean warming threaten coral reefs and disrupt the harmonious relationship between corals and their symbiotic algae, a process known as “coral bleaching.” However, a new study conducted by scientists at the University of Hawai’i (UH) at Mānoa and the California Academy of Sciences revealed soft tissues that cover the rocky coral skeleton promote the recovery of corals following a bleaching event.

These soft tissues, which are home to beneficial algae, represent a source of energy for corals. The study, led by Chris Wall, a graduate student at the Hawai’i Institute of Marine Biology (HIMB) in the UH Mānoa School of Ocean and Earth Science and Technology (SOEST), showed corals with thicker tissue may be better equipped to survive bleaching in a warming ocean.

Coral reefs are a vital resource to the people of Hawai’i and the state’s economy in the form of tourism, diving, and recreational fisheries, in addition to protecting shorelines from storms and coastal erosion.

When corals are stressed, they lose the colorful algae living in their tissues, resulting in bleaching and sometimes death of the corals. These events have been historically rare in the Hawaiian Islands, but heat stress is becoming more widespread as a result of climate change. Repeated bleaching events in 2014 and 2015 show that Hawai’i is not immune to the effects of ocean warming.

“While we know a great deal about thermal stress and its effects on corals, we know comparatively little about how corals recover from bleaching in the real world, or how local factors, such as light or nutrients in seawater, can influence recovery from bleaching,” said Wall.

In the fall of 2014, Wall and colleagues studied colonies of two species of corals, rice coral and finger coral, in Kāne’ohe Bay, O’ahu, Hawai’i, when seawater in the bay reached unusually high temperatures of 86F, which is near the maximum temperature Hawaiian corals can tolerate. The team was interested in how colonies that were sensitive to thermal stress responded to and recovered from bleaching compared to adjacent coral colonies that remained pigmented and did not bleach.

During the warming event and three months later, the team assessed the coral animals and their symbiotic algae, and throughout the study measured environmental factors including light levels, water temperatures, sedimentation rates, and seawater nutrients to better understand how environmental factors influenced the severity of coral bleaching and rates of recovery. The researchers also used naturally-occurring chemical signatures in coral tissues to test how corals were performing and what they were eating during and after stress.

“A coral’s diet is based on food from their symbionts and the consumption of small organisms in seawater known as plankton, and these two sources supply the building blocks for coral tissues. But under bleaching, corals are left without their symbionts and are in effect starving. We wanted to know how corals overcome this nutritional dilemma — were they relying on stored energy in their tissues (much like a bear in hibernation) or were they eating more plankton?”

The bleached colonies did not die and showed remarkable resilience, recovering from losses in both their symbionts and soft tissues within three months. This recovery was hastened by environmental factors, such as cooler water temperatures and water with low nutrient concentrations, which influenced coral tissues.

The researchers determined that coral tissues are very important in the bleaching recovery process and corals with abundant or thick tissues may be able to better survive and recover from bleaching stress. The stored energy in coral tissues, and not greater plankton feeding, served as food for corals during thermal stress and helped corals recover.

“Kāne’ohe Bay is a unique coral ecosystem that has rebounded from decades of human impacts. Therefore, corals in Kāne’ohe Bay may hold valuable lessons for science as we work to understand the basis for coral tolerance to the environmental challenges experienced today and those to come in the future as humans continue to change our global climate,” said Wall.

In the future, the researchers will work to better understand what mechanisms underpin the coral animals’ and their microbes’ tolerance and vulnerability to ocean warming.