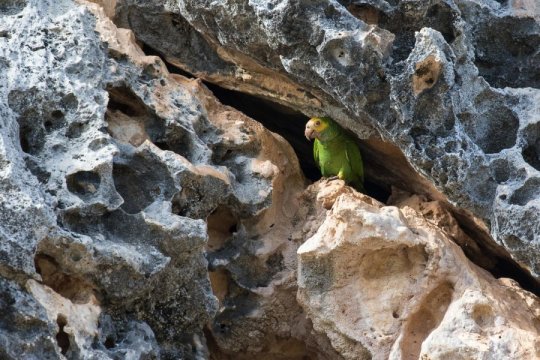 Encouraging people to change their behavior through social marketing campaigns can help the recovery of threatened wildlife populations.

Social marketing borrows ideas from traditional marketing, but instead of trying to sell a product, it tries to change human behavior. Such campaigns have been successful in promoting actions such as recycling and quitting smoking, and the technique has been adopted by conservationists looking to protect certain species.

However, it has been difficult for conservationists to gauge the long-term success of such campaigns, as populations of species may take some time to recover. Now, by examining all the possible drivers of population change, a team from Imperial College London have been able to identify social marketing as a key factor in the recovery of a threatened species.

The team, who published their results today in the journal Conservation Biology, looked at the campaign to save the yellow-shouldered Amazon parrot, or lora, a bird native to the Caribbean island of Bonaire. The ‘Rare Pride’ campaign used a mix of marketing techniques, including posters, songs, fact sheets and church sermons to raise awareness about the lora’s threatened status and about the laws surrounding lora ownership, capture and trade.

Co-author Dr Morena Mills, from the Department of Life Sciences at Imperial, said: “Twenty years ago, before a conservation campaign was launched, there were more yellow-shouldered amazon parrots in captivity on Bonaire than there were in the wild.

“Since that time, annual population surveys show that the parrot species is recovering, growing from 294 individuals in 1998 to 1023 in 2018. We wanted to know what initiatives brought about this change.”

They found that there were likely three main explanations for the lora population recovery, including social marketing campaigns to change behavior. Gabby Salazar, who led the paper as part of her Masters thesis at Imperial, said: “Using a qualitative evaluation technique, we found that the increase has likely been driven by a combination of behavior change campaigns, environmental education programs, and law enforcement efforts.”

Co-author Dr Diogo Veríssimo, a Fellow at the Oxford Martin School and international leader in conservation marketing research, said: “Measuring the impact of conservation programmes can be hard as wildlife populations often need many years to show signs of recovery. This research is one of the first to look at the long-term impacts of behaviour change campaigns, and provides evidence that these can play an important role in the recovery of wildlife populations.”

Ms Salazar added: “We need more time-efficient, cost-effective ways to understand the impact of conservation initiatives, including marketing campaigns that try to influence human behaviors. General Elimination Methodology, the methods we use in this study, fulfilled all these criteria.”