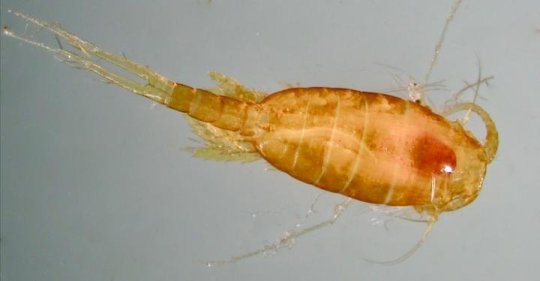 Oceanographers at the University of Rhode Island have found that even slight levels of ocean oxygen loss, or deoxygenation, have big consequences for tiny marine organisms called zooplankton.

Zooplankton are important components of the food web in the expanse of deep, open ocean called the midwater. Within this slice of ocean below the surface and above the seafloor are oxygen minimum zones (OMZs), large regions of very low oxygen. Unlike coastal “dead zones” where oxygen levels can suddenly plummet and kill marine life not acclimated to the conditions, zooplankton in OMZs are specially adapted to live where other organisms — especially predators — cannot. But OMZs are expanding due to climate change, and even slight changes to the low oxygen levels can push zooplankton beyond their extraordinary physiological limits.

“Although the animals in the ocean’s oxygen minimum zone have adapted over millions of years to the very low oxygen of this extreme and widespread midwater habitat, they are living at the very limits of their physiological capability,” said Karen Wishner, a professor of oceanography at URI’s Graduate School of Oceanography and lead author of a new paper on deoxygenation and zooplankton in the Eastern Tropical North Pacific OMZ. “Our research shows that they are sensitive to very small changes in oxygen, and decrease in abundance when oxygen gets just a little bit lower.”

The research team, which this week published their findings in Science Advances, found more natural variability in oxygen levels in the OMZ than previously known. This has a direct effect on the distribution of many types of zooplankton because, as the team discovered, the organisms respond to a less than 1 percent reduction in oxygen levels.

While zooplankton have had millions of years to adapt to conditions in the OMZ, these low oxygen zones may expand rapidly due to climate change, leading to major unanticipated changes to midwater ecosystems. For example, an expansion of the OMZ into shallower waters may make zooplankton more susceptible to predators like fish. If this leads to a zooplankton population crash, it will have impacts all the way up the food chain.

“Further loss of oxygen in ocean waters is predicted in the future as a result of global warming, and these animals may be unable to adapt and persist,” Wishner said. “They are important components of the food web of oceanic ecosystems, and their loss could potentially impact top predators, including whales and commercially important fisheries.”

Materials provided by University of Rhode Island. Note: Content may be edited for style and length.