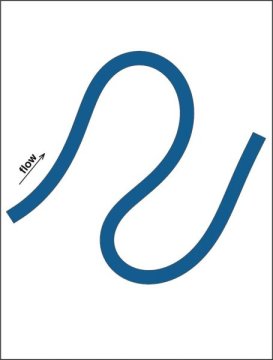 Left to their own devices and given enough time, rivers wander, eroding their banks and leaving their old channels behind. It’s a behavior that engineers have to keep in mind when managing rivers or planning projects near them. But new research from The University of Texas at Austin has revealed that old methods for estimating migration rates may be overthinking it.

The research was led by the UT Jackson School of Geosciences Bureau of Economic Geology and found that the rate of river migration is directly linked to how sharp its bends are — a finding that challenges the prevailing wisdom on how river curvature and migration relate and shows that the relationship is not as complicated as previously thought, said Zoltán Sylvester, a research scientist at the bureau who led the study.

The work involved tracking river migration in the Amazon Basin using satellite photos. The findings were published in the journal Geology on February 6. It was co-authored by Paul Durkin, an assistant professor at the University of Manitoba and Jacob Covault, a research scientist at the bureau.

It is established science that the rate of river migration — how quickly parts of a river move across a landscape — is driven by the curvature of its bends. However, earlier research found that there was a cap on how much curvature could influence migration rate. According to these earlier findings, the maximum migration rate occurred along parts of the river where the radius of curvature of the bend (a value that relates to bend sharpness) is two to three times the width of a river. Curves sharper than that were thought to slow migration down by creating a more turbulent environment for water to flow through.

In contrast, Sylvester and his team found that there is no cap. Instead, there appears to be a direct connection between river bend curvature and migration rate, with sharper bends causing a higher erosion rate — which is linked to a faster rate of migration. Another key finding is that the migration linked with the curvature occurs downstream from the bend itself — not exactly alongside as it was previously often considered.

“If you take into account this shift … they beautifully line up,” Sylvester said.

Sylvester said that this shift was overlooked in most earlier research and may have contributed to the idea that there is a medium curvature for which migration rates are highest.

The researchers used satellite data acquired by the Landsat program to reveal the connection between river bends and migration, with the images giving the researchers a bird’s-eye view of hundreds of river bends along seven rivers in the Amazon Basin and how they migrated over the past 30 years. The researchers chose to focus on the rivers in the Amazon Basin because of their high migration rate and their location away from the interference of people or complicated geological settings. These other factors can influence the rate of river migration — but having a baseline idea of how the curvatures help control a river is a useful starting point and could help reveal when other factors are at play, said Jonathan Schwenk, a postdoctoral fellow at Los Alamos National Lab who studies river behavior.

“The authors’ method for relating curvature to migration rate provides a very nice framework for determining where a simple migration model is appropriate,” said Schwenk. “I would love to see this analysis extended to rivers flowing through different environments to really get a sense of the factors that make simple models and the theory diverge from observed migration patterns.”