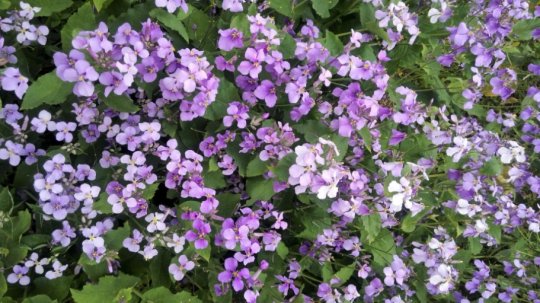 Seed oil components of an ornamental flower could provide a direct pathway for designing a new class of environmentally friendly lubricants. Researchers at the School of Science at IUPUI identified the compound in the seed oil that is produced in a manner unlike any other fatty acid. The study was published today online in the journal Nature Plants.

The Orychophragmus violaceus plant is a purple flower native to China; it’s commonly referred to as the February orchid. While collaborating on the O. violaceus plant’s biology and genetic makeup, researchers at Huazhong Agricultural University in Wuhan, China, and the University of Nebraska-Lincoln encountered a bit of a mystery: All plant seeds contain oils as energy reserves for later growth, but researchers noticed the February orchid seed oils were unusual.

“This was a serendipitous discovery because we didn’t think there were any unusual compounds in the plant,” Minto said. “It turned out that almost half the seed oil is these unusual fatty acid compounds that had never been identified.”

Minto and IUPUI researcher Alicen Teitgen determined the major compound’s structure, a process complicated by the plainness of a portion of the molecule. This result led the research team to the realization that the way the O. violaceus plant’s seed oil is made is extraordinary. The seed oil contains a fatty acid, which is a long linear molecule made when two-carbon units are added to the end of the molecule over and over again. Each of these elongation steps requires a four-reaction cycle to add the carbon units. During normal fatty acid production, no reaction in the set of four is left out. In O. violaceus, researchers discovered one of those cycles is only partially completed, leading to the unusual compounds.

“This the first time it’s ever been observed in any fatty acid biosynthesis that a partial cycle happens and then more cycles occur afterward,” Minto said. “There are many natural products, such as certain common antibiotics, that are made using a chemically similar process that leaves out steps in nearly every cycle. Alternately, there are fatty acid biosynthetic pathways where all the steps are completed. But there has been nothing in between.

“The biosynthesis of this seed oil compound is finally an example of the in-between.”

“Commercially, it may be prove to be a really good bio-renewable component of lubricants,” Minto said.