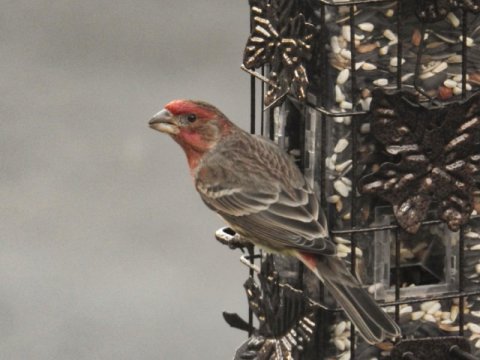 The breeding seasons of wild house finches are shifting due to climate change, a Washington State University researcher has found.

The effect of climate change on the breeding season of birds has been documented before, but in a limited context. Heather Watts, an avian physiologist, reported her finding in Ibis, the International Journal of Avian Science.

“We know that many birds are breeding earlier as temperatures get warmer,” Watts said. “Almost all of those studies are on birds that eat insects or other animals. What we don’t know is if seed-eating birds are shifting the timing of breeding too.”

Studying seed-eaters is important because it can help clarify how temperature is affecting breeding habits. It is still uncertain if temperature is having a direct effect on the animals or if it causes indirect effects like shifts in the timing of plant growth. Previous studies suggest that plant-eating animals are likely to experience stronger effects due to climate change compared to those that eat other foods because of these indirect influences.

To clarify these effects, Watts studied when house finches lay eggs. House finches are an abundant bird often seen at backyard feeders throughout the United States. Watts and her coauthors gathered museum records of house finch nests found in California between 1895 and 2007. They paired these records with spring temperature data for the regions where the nests were located.

“For every degree Celsius increase in temperature, they’re laying about four-and-a-half days earlier,” said Watts, an associate professor in WSU’s School of Biological Sciences. The magnitude of this shift was large compared to studies of other species, which fits with predictions that climate change would have stronger effects on plant-eaters than other animals.

These results aren’t necessarily problematic for the house finch. The birds could be changing their breeding timing to match the availability of seeds. This shift could even be beneficial if birds take advantage of the longer breeding season to make multiple nests and have more offspring.

“We have no evidence that under current conditions this is a problem for house finches,” Watts said. “But as climate continues to change, we could reach a point where birds are no longer able to either time breeding appropriately, or food resources could change in such a way that it has negative impacts on breeding.”

In fact, while this species is expanding into new areas of North America, it is declining in some parts of its native range.

Animals have vastly different needs in terms of food and habitats. Studies like these are important in understanding the subtle and possibly unique effects that climate change can have on different species.

Watts and her colleagues, undergraduate students from Loyola Marymount University, were supported in this research by the National Science Foundation.