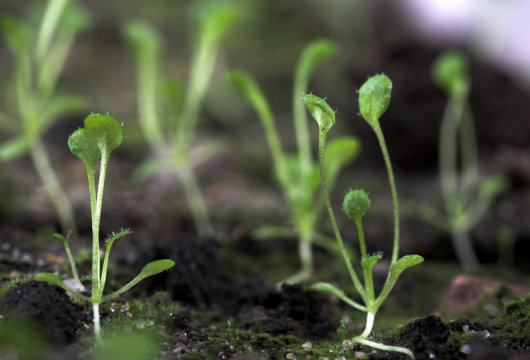 Scientists have identified a key gene that helps seeds decide whether to germinate.

The MFT gene stops seeds germinating in the dark or under shady conditions, where their chances of survival would be poor, according to new research from the University of York.

The study, conducted on Arabidopsis, a very close relative of oilseed rape, increases our understanding of one of the most important stages in the life cycle of a plant and may help to improve the seed quality of agricultural crops in the future.

Scientists have known for some time that two plant hormones play an important role in regulating if and when a seed will germinate — “Abscisic Acid” or ABA blocks germination and “Gibberelins” or GA promotes it.

However, in a breakthrough in our understanding of the mechanism by which these hormones control germination in response to light quality, the researchers have discovered that MFT is the key component that integrates and interprets signals coming from both ABA and GA.

This prevents a plant from germinating under the wrong conditions such as when there is not enough light to grow.

Professor Ian Graham, corresponding author, from the Centre for Novel Agricultural Products in the Department of Biology at the University of York, said: “This is another great example of how plants have evolved very sophisticated molecular mechanisms to stay in tune with their environment. This allows seeds to survive in the soil for many years so that when the time is right, such as when a tree falls in a forest or soil is turned over, seeds can suddenly spring into action.”

For many plant species the ability of a seed to sense the quality of light can inform it if it is located in direct sunlight, under a canopy of other plants that only allow a certain quality of light to pass through or in the dark, which is often the case when seeds are buried in the soil.

In wild plant species the ability for seeds to remain dormant even under conditions that would allow them to germinate is important for survival. For crops species, eliminating this dormancy is one of the first traits that has to be dealt with in a plant breeding programme.

Lead author of the work, Dr Fabian Vaistij, from the Department of Biology at the University of York added: “Understanding the molecular genetic basis of how seed germination is controlled will provide new tools to improve seed quality and seedling vigour in developing new crops for the future.”

MOTHER-OF-FT-AND-TFL1 represses seed germination under far-red light by modulating phytohormone responses in Arabidopsis thaliana is published in Proceedings of the National Academy of Sciences, USA.