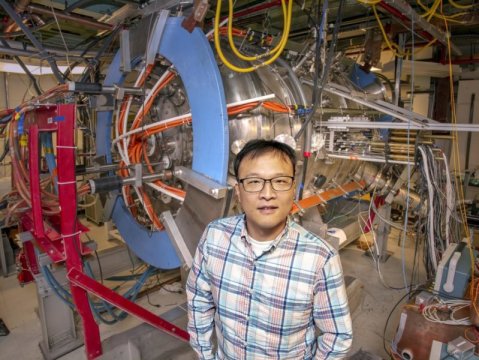 Magnetic reconnection, the snapping apart and violent reconnection of magnetic field lines in plasma — the state of matter composed of free electrons and atomic nuclei — occurs throughout the universe and can whip up space storms that disrupt cell phone service and knock out power grids. Now scientists at the U.S. Department of Energy’s (DOE) Princeton Plasma Physics Laboratory (PPPL) and other laboratories, using data from a NASA four-satellite mission that is studying reconnection, have developed a method for identifying the source of waves that help satellites determine their location in space.

The team of researchers, led by PPPL physicist Jongsoo Yoo, have correlated magnetic field measurements taken by the Magnetospheric Multiscale (MMS) mission that is orbiting at the edge of the magnetic field that surrounds the Earth. The findings identified the source of the propagation of “whistler waves” — waves with whistle-like sounds that drop from high to low and stem from reconnection — whose detection orients the satellites relative to reconnection activity that can affect the Earth.

The research, reported in Geophysical Research Letters, marks development of “a new methodology for measuring how the wave propagates in reconnection,” said Yoo, lead author of the paper. The source, he said, is what are called “tail electrons” — particles with energy that is far greater than that of the bulk electrons in reconnecting field lines. Such electrons are “temperature anisotropic,” meaning that their temperature is not uniform but differs when measured in different directions.

He began investigating the source of the waves after noticing the remarkable similarity between the activity of the waves that MMS detected and those produced in the Magnetic Reconnection Experiment (MRX) at PPPL. The similarity indicated that the physical processes were the same in both the laboratory and space and led to a search to uncover the cause. On the research team with PPPL were scientists from Columbia University, Los Alamos National Laboratory, and the NASA Goddard Space Flight Center.

Going forward, the team plans to investigate the development of whistler waves near the electron diffusion region, the narrow region in the magnetosphere and laboratory experiments where electrons separate from field lines before reconnection takes place. Results could prove relevant to the MMS mission, whose goals include uncovering the role that electrons play in facilitating reconnection. Support for this work has come from the DOE Office of Science (FES) NASA, and the National Science Foundation.