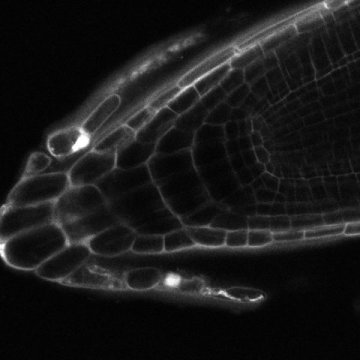 As the plant root grows, a root cap protects its fragile tip. Every few hours, the old cap is lost and a new one replaces it. This has puzzled scientists: how do cells at the tip know when to die, and how do cells further back know to divide and form a new layer — especially as these cells are several cell rows apart? Researchers at the University of Oslo and the Institute of Science and Technology Austria (IST Austria) have now, partly, solved this communication problem. As they write in today’s edition of Nature Plants, the researchers have, for the first time, observed regular cycles of root tip loss and regrowth in real time. In doing so, they uncovered the signal and receptor that coordinate this process.

The group of Reidunn Aalen at the University of Oslo, with postdoc and first author Chun-Lin Shi, discovered the signal and receptor that mediate communication at the root tip. They found that cells in the root cap secrete a small peptide, called IDL1. This peptide diffuses through the root tip. Cells at the root apical meristem, which divide to form a new root cap, have a receptor protein, called HSL2, which perceives the signal peptide IDL1. By this mechanism, the outer root cap cells that are shed and the inner cells that divide to replace them communicate.

Jiri Friml’s group at IST Austria, including former postdoc Daniel von Wangenheim and intern Ivan Kulik, observed, for the first time, how plants shed their root caps. With a laser scanning microscope that was flipped on its side — a method the research group previously developed and that led to the production the winning video in last year’s “Nikon Small World in Motion Competition” as well as to the discovery of a new role of auxin in the response to gravity — was able see root cap loss in real-time over days.

Root cap loss is a slow process — root caps are lost at a rate of about one every 18 hours. “Because root cap loss and replacement is slow, you cannot observe it under a normal microscope set-up,” Jiri Friml explains. With the flipped microscope, Kulik and von Wangenheim could observe root growth over three days and see the periodicity of cell death and root cap peeling, as Jiri Friml describes: “Our vertical microscope set-up and automatic tracking allowed us to observe how root caps are lost in natural conditions. These tools enabled us to see how root cap loss actually happens and how the cells further back divide. “

Friml’s group compared how wild-type Arabidopsis thaliana plants loose and replace their root cap with how this process occurs in mutant plants, provided by the Aalen group. They found that in plants in which communication through IDL1 and HSL2 is disrupted, root cap cells accumulate at the tip rather than peeling off. “When the signaling doesn’t work, the cell death and rebirth is not coordinated and cells hang around much longer at the tip than they should,” Friml explains.

The vertical microscope and TipTracker software developed by Robert Hauschield from the IST Austria imaging facility was essential for this work, Kulik says: “Of course, roots grow. So while you image a root in the confocal microscope, the root tip would eventually grow out of the field of vision. With the TipTracker, the microscope compares the root tip’s location between images and automatically adjusts the objective’s position, so that root tips can be followed even over several days.”