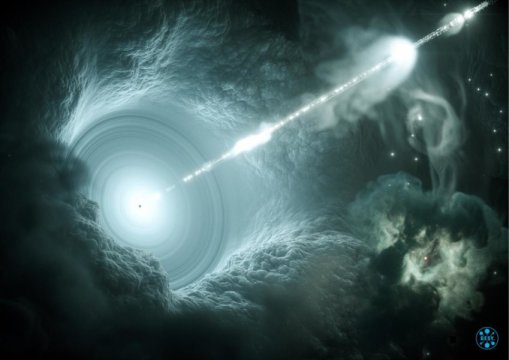 Using an internationally organised astronomical dragnet, scientist have for the first time located a source of high-energy cosmic neutrinos, ghostly elementary particles that travel billions of light years through the universe, flying unaffected through stars, planets and entire galaxies. The joint observation campaign was triggered by a single neutrino that had been recorded by the IceCube neutrino telescope at the South Pole, on 22 September 2017. Telescopes on earth and in space were able to determine that the exotic particle had originated in a galaxy over three billion light years away, in the constellation of Orion, where a gigantic black hole serves as a natural particle accelerator. Scientists from the 18 different observatories involved are presenting their findings in the journal Science. Furthermore, a second analysis, also published in Science, shows that other neutrinos previously recorded by IceCube came from the same source.

The observation campaign, in which research scientists from Germany played a key role, is a decisive step towards solving a riddle that has been puzzling scientists for over 100 years, namely that of the precise origins of so-called cosmic rays, high-energy subatomic particles that are constantly bombarding Earth’s atmosphere. “This is a milestone for the budding field of neutrino astronomy. We are opening a new window into the high-energy universe,” says Marek Kowalski, the head of Neutrino Astronomy at DESY, a research centre of the Helmholtz Association, and a researcher at the Humboldt University in Berlin. “The concerted observational campaign using instruments located all over the globe is also a significant achievement for the field of multi-messenger astronomy, that is the investigation of cosmic objects using different messengers, such as electromagnetic radiation, gravitational waves and neutrinos.”

Messengers from the high-energy universe

One way in which scientists expect energetic neutrinos to be created is as a sort of by-product of cosmic rays, that are expected to be produced in cosmic particle accelerators, such as the vortex of matter created by supermassive black holes or exploding stars. However, unlike the electrically charged particles of cosmic rays, neutrinos are electrically neutral and therefore not deflected by cosmic magnetic fields as they travel through space, meaning that the direction from which they arrive points straight back at their actual source. Also, neutrinos are scarcely absorbed. “Observing cosmic neutrinos gives us a glimpse of processes that are opaque to electromagnetic radiation,” says Klaus Helbing from the Bergische University of Wuppertal, spokesperson for the German IceCube network.””Cosmic neutrinos are messengers from the high-energy universe.”

Demonstrating the presence of neutrinos is extremely complicated, however, because most of the ghostly particles travel right through the entire Earth without leaving a trace. Only on very rare occasions does a neutrino interact with its surroundings. It therefore takes huge detectors in order to capture at least a few of these rare reactions. For the IceCube detector, an international consortium of scientists headed by the University of Wisconsin in Madison (USA) drilled 86 holes into the Antarctic ice, each 2500 metres deep. Into these holes they lowered 5160 light sensors, spread out over a total volume of one cubic kilometre. The sensors register the tiny flashes of light that are produced during the rare neutrino interactions in the transparent ice.

Five years ago, IceCube furnished the first evidence of high-energy neutrinos from the depths of outer space. However, these neutrinos appeared to be arriving from random directions across the sky. “Up to this day, we didn’t know where they originated,” says Elisa Resconi from the Technical University of Munich, whose group contributed crucially to the findings. “Through the neutrino recorded on 22 September, we have now managed to identify a first source.”

From radio waves to gamma radiation

The energy of the neutrino in question was around 300 tera-electronvolts, more than 40 times that of the protons produced in the world’s largest particle accelerator, the Large Hadron Collider at the European accelerator facility CERN outside Geneva. Within minutes of recording the neutrino, the IceCube detector automatically alerted numerous other astronomical observatories. A large number of these then scrutinised the region in which the high-energy neutrino had originated, scanning the entire electromagnetic spectrum: from high-energy gamma- and X-rays, through visible light, to radio waves. Sure enough, they were able for the first time to assign a celestial object to the direction from which a high-energy cosmic neutrino had arrived.

“In our case, we saw an active galaxy, which is a large galaxy containing a gigantic black hole at its centre,” explains Kowalski. Huge “jets” shoot out into space at right angles to the massive vortex that sucks matter into the black hole. Astrophysicists have long suspected that these jets generate a substantial proportion of cosmic particle radiation. “Now we have found key evidence supporting this assumption,” Resconi emphasises.

The active galaxy that has now been identified is a so-called blazar, an active galaxy whose jet points precisely in our direction. Using software developed by DESY researchers, the gamma-ray satellite Fermi, operated by the US space agency NASA, had already registered a dramatic increase in the activity of this blazar, whose catalogue number is TXS 0506+056, around 22 September. Now, an earthbound gamma-ray telescope also recorded a signal from it. “In the follow-up observation of the neutrino, we were able to observe the blazar in the range of very high-energy gamma radiation too, using the MAGIC telescope system on the Canary Island La Palma,” says DESY’s Elisa Bernardini, who coordinates the MAGIC observations. “The gamma-rays are closest in energy to neutrinos and therefore play a crucial role in determining the mechanism by which the neutrinos are created.” The programme for the efficient follow-up observation of neutrinos using gamma-ray telescopes was developed by Bernardini’s group.

The NASA X-ray satellites Swift and NuSTAR also registered the eruption of the blazar, and the gamma-ray telescopes H.E.S.S., HAWC and VERITAS as well as the gamma-ray and X-ray satellites AGILE, belonging to the Italian Space Agency ASI, and Integral, belonging to the European Space Agency ESA, all took part in the follow-up observations. All in all, seven optical observatories (the ASAS-SN, Liverpool, Kanata, Kiso Schmidt, SALT and Subaru telescopes, as well as the Very Large Telescope VLT of the European Southern Observatory, ESO) observed the active galaxy, and the Karl G. Jansky Very Large Array (VLA) studied its activity in the radio spectrum. This led to a comprehensive picture of the radiation emitted by this blazar, all the way from radio waves to gamma-rays carrying up to 100 billion times as much energy.

A worldwide team of scientists from all the groups involved worked flat out, conducting a complicated statistical analysis to determine whether the correlation between the neutrino and the gamma-ray observations was perhaps just a coincidence. “We calculated that the probability of it being a mere coincidence was around 1 in 1000,” explains DESY’s Anna Franckowiak, who was in charge of the statistical analysis of the various different data sets. This may not sound very large, but it is not small enough to quell the professional scepticism of physicists.

A second line of investigation rectified this. The IceCube researchers searched through their data from the past years for possible previous measurements of neutrinos coming from the direction of the blazar that had now been identified. And they did indeed find a distinct surplus of more than a dozen of the ghost particles arriving from the direction of TXS 0506+056 during the time between September 2014 and March 2015, as they are reporting in a second paper published in the same edition of Science. The likelihood of this excess being a mere statistical outlier is estimated at 1 in 5000, “a number that makes you prick up your ears,” says Christopher Wiebusch from RWTH Aachen, whose group had already noted the hint of excess neutrinos from the direction of TXS 0506+056 in an earlier analysis. “The data also allows us to make a first estimate of the neutrino flux from this source.” Together with the single event of September 2017, the IceCube data now provides the best experimental evidence to date that active galaxies are in fact sources of high-energy cosmic neutrinos.

“We now have a better understanding of what we should be looking for. This means that we can in future track down such sources more specifically,” says Elisa Resconi. And Marek Kowalski adds, “Since neutrinos are a sort of by-product of the charged particles in cosmic rays, our observation implies that active galaxies are also accelerators of cosmic ray particles. More than a century after the discovery of cosmic rays by Victor Hess in 1912, the IceCube findings have therefore for the first time located a concrete extragalactic source of these high-energy particles.”