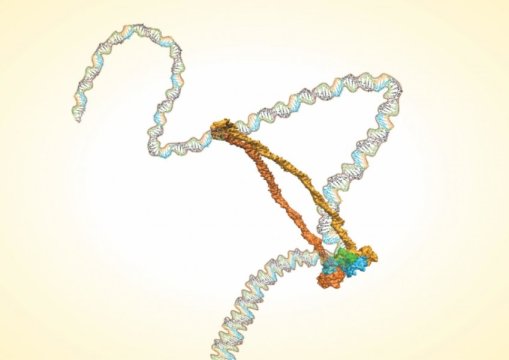 The Rice lab of José Onuchic has determined the structure of the condensin protein complex. The work settles the controversy over whether the complex is a single ring that lassos two double strands of DNA or a molecular “handcuff” composed of two connected rings that each wrangle a double strand.

Their work is the first step toward understanding the activity of proteins over the structure of chromosomes throughout mitosis and all phases of the cell life cycle. That understanding will help scientists learn how to better treat genetic diseases, including cancer.

The results of the Rice team’s two-year study appear in the Proceedings of the National Academy of Sciences.

Condensin does what the word suggests: It helps condense the chromosomes into the cell’s nucleus. Recent research has demonstrated that condensin and its protein partner cohesin extrude DNA. But until now, nobody has settled on how condensin proteins come together into their functional forms.

Krepel started her analysis from bacterial condensin complexes made up of five subunits, including two structural maintenance of chromosomes (SMC) proteins that come together as a hinge and long kleisin proteins that make up the rest of the ring. Complexes in human eukaryotic nuclei — a target for future analysis — are similar to their more archaic counterparts.

Krepel pieced the puzzle together by combining and comparing existing data about the atomic structures and genetic sequences of the individual proteins. The structures came from available X-ray crystallography of protein fragments, and sequence information through direct coupling analysis (DCA), a statistics-based program introduced by Onuchic and his colleagues in 2011 that compares amino acid residues in proteins that coevolve.

“We used DCA to infer coevolving pairs of amino acids, and we had little bits of protein fragments from experiments,” Krepel said. “That was a good starting point, and then we had to put them together like a puzzle. We wanted to get a full structure and settle the conflict over whether it’s a single or double ring.”

Knowing how proteins evolve together was key. “This is a modular mechanism made of many proteins,” said Rice postdoctoral researcher and co-author Michele Di Pierro. “It’s easier to crystallize one protein, but it’s very difficult to figure out the structure of this entire complex. That’s why it was ideal to look at coevolution, which lets us get information about the complex even if we don’t have the structure.”

“Coevolution is basically about natural selection,” added Ryan Cheng, also a postdoctoral researcher and co-author of the paper. “As you get random mutations, certain interactions need to be preserved to keep the function of that complex.”

“We expect that where these two residues come together and match, they’re going to evolve together,” Onuchic said. “If this one makes a mutation and has a bad reaction, the other one has to compensate. Dana asked if can we get this sequence information together with small crystal structures and determine these gigantic structures, and it turned out that we can.”

Onuchic’s group at Rice’s Center for Theoretical Biological Physics (CTBP) has published a series of papers that extend its theories on protein folding to the much larger genome. He expects ongoing work will eventually reveal condensin’s mechanisms. “These things have to condense the chromosomes,” he said. “People know that. But nobody knows how they do it.”

Onuchic said studies by others suggest the flexible hinge may help open and close the ring, serving as a gate that allows DNA strands in and out, a process also hinted at by the Rice study. But without knowing the position of every molecule in the complex, there is no way to completely understand its function and dynamics.

“We know the condensin complex is involved, because if you remove it, mitosis doesn’t happen,” he said. “But nobody understands the mechanism. Now that we have this structure, we have the first shot at understanding the molecular details.”