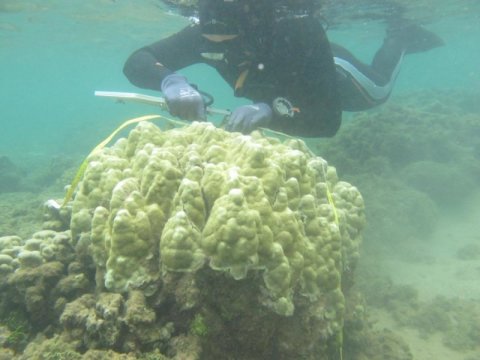 The existence and causes of coral bleaching are recognized as an increasing world-wide environmental concern related to climate change. A number of experiments have been conducted since the early 1970s at the Hawai’i Institute of Marine Biology’s (HIMB) Coral Reef Ecology Laboratory in Kane’ohe Bay, Hawai’i and the Mid-Pacific Marine Laboratory (MPL) at Enewetak, Marshall Islands to determine the long-term temperature thresholds inducing coral bleaching. A new study published in PeerJ — the Journal of Life & Environmental Sciences replicates 1970s experiments and provides encouraging evidence to suggest corals today are adapting at an unexpectedly rapid rate. Still, these rates are being outpaced by rising ocean temperatures.

Coral bleaching is a process wherein corals lose their symbiotic algae, zooxanthellae, which provide a significant food source and color to their coral host. The white coral skeleton is then visible through the transparent tissues giving the characteristic “bleached” appearance. Mortality will occur if the coral and symbiont relationship is not reestablished shortly.

The 1970s experiments were the first to simulate elevated temperature stress in a flow-through seawater system, and the results duplicated the effects of high temperature events that have become increasingly wide-spread, frequent and severe in coral habitats worldwide in the last 35 years. Results determined temperature tolerances of corals were very low, only +1-2ºC above the normal maximum temperatures. Although temperatures varied geographically, most coral species began to bleach within this range.

The identical system, methodology, and location of the initial 1970s experiment was replicated in 2017 with one of the original researchers, Dr. Steve Coles. This provided an unique opportunity to evaluate whether coral bleaching thresholds have changed in nearly half a century. Corals were held at ambient and elevated temperatures comparable to the 1970 experiment for a one-month exposure, followed by a 28 days recovery period.

“To better understand coral acclimatization and adaptation, most studies compare corals from different reef locations, whereas this is the first study to compare the same coral species from the same location over time. Re-running a 48-year old experiment using the same coral species, same experimental setup, and same observer allows us to directly test changes in coral temperature tolerance over the last half century,” according to Dr. Keisha Bahr.

Differences between the two experiments were dramatic. Results show a substantial increase in temperature tolerance within the tested corals. In the three species of Hawaiian corals retested, bleaching occurred later, with higher survivorship and growth rates than corals in 1970. In 2017, survivorship was significantly higher (60-92%) as compared to 1970 (0-40%). Under elevated temperatures, calcification growth rates were reduced by an average of 26-63%, whereas in 1970, average calcification reductions ranged between 99-173%.

Such dramatic differences in coral bleaching temperature thresholds indicate a capacity for adjustment in temperature tolerance, either by changes in physiological process or shifts in symbiotic zooxanthellae types (acclimatization), or natural selection for the survival of more temperature tolerant corals (adaptation). Until now, it had not been determined how long these processes take or if this change can occur at a pace rapid enough to adjust to the frequency and severity of current elevated temperature events.

“Although these results are encouraging in their indication that acclimatization/adaptation of corals and their symbionts can occur at an unexpectedly rapid rate, increased bleaching tolerance may not be enough for widespread coral survival” Dr. Ku’ulei Rodgers said.

“A possible influence on the results may be the substantially higher water quality in the Kane’ohe Bay in 2017 as compared to 1970 due to nearby secondary treated sewage release at the time. Elevated levels of dissolved nitrogen have been implicated in stimulating coral bleaching. When verified, this will support the importance of reducing land-based source nutrients to assist management in limiting coral bleaching and mortality,” according to Dr. Steve Coles.

The slow growth and recruitment of many species of corals, combined with repetitive bleaching events of increasing severity and duration, may lead to catastrophic regional reductions in coral diversity and abundance. To prevent or even mitigate, this will require reduction in use of fossil fuels and lower emissions of CO2 and other greenhouse gases that are increasing air and seawater temperatures worldwide at an alarming rate.