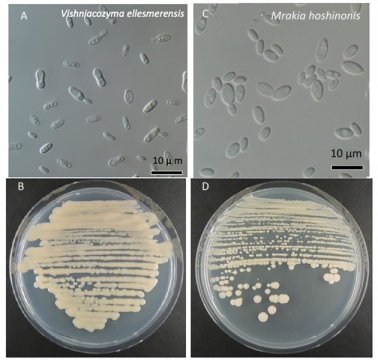 Two new species of fungi have made an appearance in a rapidly melting glacier on Ellesmere Island in the Canadian Arctic, just west of Greenland. A collaborative team of researchers from Japan’s National Institute of Polar Research, The Graduate University for Advanced Studies in Tokyo, Japan, and Laval University in Québec, Canada made the discovery.

The scientists published their results on DATE in two separate papers, one for each new species, in the International Journal of Systematic and Evolutionary Microbiology.

“The knowledge of fungi inhabiting the Arctic is still fragmentary. We set out to survey the fungal diversity in the Canadian High Arctic,” said Masaharu Tsuji, a project researcher at the National Institute of Polar Research in Japan and first author on both papers. “We found two new fungal species in the same investigation on Ellesmere Island.”

One species is the 10th to join the genus Mrakia, with the proposed name M. hoshinonis, in honor of Tamotsu Hoshino, a senior researcher at the National Institute of Advanced Science and Technology in Japan. Hoshino has made significant contributions to the study of fungi in polar regions. The other species is the 12th to join the genus Vishniacozyma, with the proposed name V. ellesmerensis as a nod to the island where it was found. Both species are types of yeast that are well-adapted to the cold and can even grow below 0°C.

The samples of fungi were collected from the unofficially named Walker Glacier. The designation comes from Paul T. Walker, who installed the datum pole that measures the glacier’s growth and shrinkage, in 1959. At the time of sample collection in 2016, measurements showed that the glacier was receding at a rate two-and-a-half times faster than its retreat over the previous 50 years.

“Climate-related effects have been observed in this region over the last 20 years,” Tsuji said. “Soon, some of the glaciers may completely melt and disappear.”

Only about five percent of fungi species have been discovered, but their function across ecological climates is well understood — from the tropics to the Arctic, fungi decompose dead organic material. Each species operates a little differently, but their general role is to reintroduce nutrients from dead plant material back into the ecosystem. If the glaciers melt, the fungi lose their habitat. The results could have catastrophic knock-on effects throughout the ecosystem, according to Tsuji, although more research is needed to understand exactly how the changing climate is influencing fungi beyond destroying their habitat.

Next, Tsuji and his team plan to survey the fungi in Ward Hunt Lake, the northern most lake in the world. It is on Ward Hunt Island, just off the northern coast of Ellesmere Island, and less than 500 miles from the North Pole

“Normally, the lake’s ice doesn’t melt during the summer season. However, the ice melted completely in 2016. We plan to continuously check how the lake’s fungal diversity changes,” Tsuji said. The different species could evolve, or, potentially, go extinct. “Eventually, we plan to compile all of our studies to provide an overview of terrestrial ecosystems in the Arctic and Antarctic regions.”

Materials provided by Research Organization of Information and Systems. Note: Content may be edited for style and length.