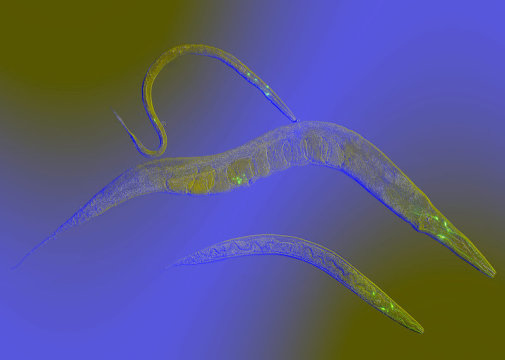 Princeton University researchers have discovered that learned behaviors can be inherited for multiple generations in C. elegans, transmitted from parent to progeny via eggs and sperm cells. The paper detailing this finding, by Rebecca Moore, Rachel Kaletsky and Coleen Murphy, appears in the June 13 issue of the journal Cell.

It’s well known that an organism’s characteristics are encoded in genes that are passed down from parent to progeny through the eggs and sperm of the germline. The inheritance of some traits is determined exclusively by whether the individual receives the dominant or recessive form of an associated gene from each parent. Other heritable traits are influenced both by genetic makeup and by factors such as nutrition, temperature or environmental stress, which can affect the expression levels of related genes. Features whose inheritance isn’t driven exclusively by DNA sequence are termed “epigenetic” (the prefix “epi” means “on top of”).

An organism’s phenotype can change during its lifetime due to epigenetic mechanisms. For example, in the microscopic roundworm Caenorhabditis elegans, starvation or heat stress prompts animals to adapt to these conditions by varying the expression of multiple genes. At the level of the genome, these changes can be made durable by altering how tightly the DNA that encodes a gene is packed, thereby regulating its accessibility to RNA transcription machinery. Alternatively, cells can engage mechanisms that destroy or sequester protein-coding RNA transcripts. When these modifications are made in germ cells, they can be passed down to future generations in a phenomenon is known as transgenerational epigenetic inheritance. Studies have shown that C. elegans adaptations to starvation and heat stress can be inherited for several generations. Might more complex phenotypes, such as behavioral changes, also be passed down in this way?

“In their natural environment, worms come into contact with many different bacterial species. Some of these are nutritious food sources, while others will infect and kill them,” said Murphy, a professor in Princeton’s Department of Molecular Biology and the Lewis-Sigler Institute for Integrative Genomics. “Worms are initially attracted to the pathogen Pseudomonas aeruginosa, but upon infection, they learn to avoid it. Otherwise they will die within a few days.”

Moore and her colleagues investigated whether C. elegans can convey this learned avoidance behavior to their progeny. They found that when mother worms learned to avoid pathogenic P. aeruginosa, their progeny also knew to avoid the bacteria. The natural attraction of offspring to Pseudomonas was overridden even though they had never previously encountered the pathogen. Remarkably, this inherited aversive behavior lasted for four generations, but in the fifth generation the worms were once again attracted to Pseudomonas. In another surprise, the researchers observed that inheritance of learned avoidance was not universal for all pathogenic bacteria; although mother worms could learn to avoid the pathogenic bacterium Serratia marcescens, which is less abundant than Pseudomonas in C. elegans‘ environment, this aversion was not passed down to offspring. Intrigued, the researchers set out to explore what controls transmission of P. aeruginosa avoidance behavior across generations.

The authors showed that C. elegans mothers must actually become ill from ingesting P. aeruginosa in order to transmit avoidance to future generations; exposure to odors emitted by the pathogen wasn’t sufficient to provoke avoidance. Nonetheless, neuronal sensory pathways are important for inherited avoidance, because avoidance behavior in both mothers and their progeny was associated with upregulated expression of several neuronally-associated genes. Among these, elevated expression of the TGF-β ligand daf -7 in mothers was needed for progeny to inherit pathogen aversion. Moore and her colleagues found that daf-7 expression in a certain type of sensory neuron, ASI neurons, correlated strongly with inherited avoidance behavior.

“The process of inheriting this learned avoidance [also] requires the activity of small RNAs called piRNA,” Murphy said. piRNAs have been implicated in other transgenerational epigenetic inheritance pathways in C. elegans, where they’re thought to silence gene expression and indirectly regulate DNA packing. The researchers found that the piRNA-associated protein PRG-1, while not necessary for C. elegans mothers to learn avoidance of P. aeruginosa, was required for increased daf-7 expression in progeny, and for their inherited avoidance behavior. Whether piRNAs and PRG-1 operate primarily in the mother, the progeny, or both to promote inheritance of avoidance behavior isn’t yet known.

Importantly, expression of daf-7 remains elevated in the ASI neurons of progeny for four generations, then returns to basal levels in the fifth generation, which is when the inherited avoidance behavior also disappears. As Murphy points out, although inheritance of avoidance behavior provides a survival advantage, it’s also necessary for this avoidance behavior to eventually go away. That’s because P. aeruginosa is only pathogenic at high temperatures; at lower temperatures, it’s increasingly safe to eat, as are other Pseudomonas species. If the pathogenic threat is temporary, the eventual lapsing of inherited avoidance allows future generations to return to feasting on nutritious Pseudomonas.

“Transgenerational learned pathogenic avoidance is mediated by TGF-beta and the Piwi/PRG-1 Argonaute pathway” by Rebecca S. Moore, Rachel Kaletsky, and Coleen T. Murphy appears in the June 13 issue of Cell. The research was supported by the National Institute of General Medical Sciences of the National Institutes of Health (T32GM007388 and 1DP2OD004402-01), the Glenn Foundation for Medical Research (CNV1001899), and the Howard Hughes Medical Institute Faculty Scholar Program (AWD1005048).