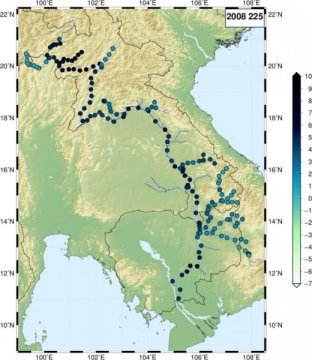 Water levels in the Mekong basin, which extends through six countries in South-East Asia, are subject to considerable seasonal fluctuations. A new model now makes it possible to compute how water levels are impacted on various sections of the river by extreme weather events such as heavy rainfall or drought over extended periods.

Statistical modelling of the river system

To model the flow patterns of the river, with its complex network of distributaries, Claudia Klüppelberg, a professor of Mathematical Statistics at TUM, used statistical methods to link satellite data. A team at the German Geodetic Research Institute at TUM applied specially developed algorithms to raw measurement data collected from satellite missions. The new model makes it possible to extrapolate water level data for certain points to determine the levels at almost any location in the entire river system.

Altimetry instruments transmit radar waves from satellites to Earth. These signals bounce back from the water surface towards the source. “By measuring the time taken by the radar waves to travel that distance, we can calculate the water levels,” says Florian Seitz, a professor of Geodetic Geodynamics at TUM. “However, that is possible only where the satellite’s track crosses a body of water. But for purposes of the water supply, hydrological analysis and safety issues such as the potential risk of flooding, it is equally important to know the water levels at other points.”

Altimetry satellites on repetitive orbits usually pass over the same points on a repeating cycle of 10 to 35 days. As a result, water level data are captured for each of these points at regular intervals. The researchers also used observations collected by an SAR altimetry satellite. Instead of following a repetitive orbit, this satellite collects data at a given point on the river just once. However, the points covered are distributed throughout the entire river system. The SAR altimetry method is also superior to conventional systems in terms of accuracy.

The researchers of the involved institutes combined the different types of satellite data using a statistical method known as universal kriging. “Being able to include these additional, highly accurate measurements with a good spatial distribution in our model greatly improved the quality of the results,” says Claudia Klüppelberg.

A single method for all major river systems

“The seasonal fluctuations in water levels on the Mekong, the diverse topography, and the regular flooding enabled us to test many different scenarios,” says Florian Seitz. “The methods we have developed are applicable to all major river systems — even where there are no ground stations to measure water levels.”